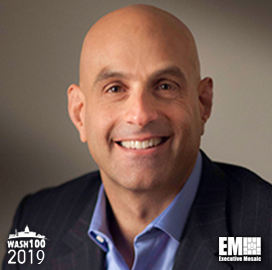 Executive Mosaic is honored to name Julian Setian, president and chief executive officer of SOS International, as an inductee into the 2019 Wash100 “” Executive Mosaic's annual selection of the most influential voices in the government contracting arena. This latest honor marks the first Wash100 Award for Setian.

SOSi secured a potential five-year, $191.2 million contract from the Army to perform base-life support and security services at a military complex in Taji, Iraq that houses coalition forces who are supporting Operation Inherent Resolve. The company also won a potential $78 million, firm-fixed price contract to provide technical support for the Army's Europe Intelligence directorate. Setian explained that the award would expand the company's footprint across all of Europe.

In addition, SOSi was awarded a potential $55 million contract to help the Army manage wideband enterprise satellite systems to facilitate military communications. Setian said the company aims to expand across the military's joint operations to address military satcom requirements, and the contract demonstrates synergies he anticipated after SOSi acquired STG.

The acquisition was completed to broaden the SOS International client base and expand its portfolio by adding cybersecurity, data analytics and software development capabilities supporting defense, diplomatic and intelligence agencies. Setian said SOSi and STG delivered services to the national security sector for three decades and the companies share complementary clients, competencies and missions.

He has built the company into one of the largest private, family-owned and operated firms in the defense and aerospace industry, specializing in military logistics, agile software development, cybersecurity and intelligence analysis.

“Our goal is to be the leading middle-market company in the federal technology services sector, differentiated by our private ownership structure and mission focus,“ Setian said in a statement.

Setian possesses more than two decades of experience as an entrepreneur and senior executive in the defense and government services sector. He joined SOS International in 1995 and has been president and CEO since 2001.

He serves on the board of directors and executive committee for the Professional Services Council in addition to being on the executive committee of the Washington chapter of the Young Presidents Organization. He is a member of the Business Executives for National Security, the Association of the United States Army, and the National Defense Industrial Association.

Executive Mosaic congratulates Julian Setian and the SOSi team for receiving this award.