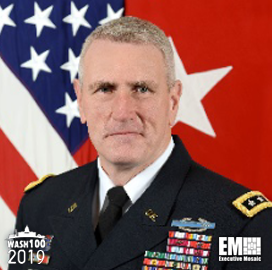 Executive Mosaic is honored to unveil Gen. John “Mike“ Murray, commander of the Army Futures Command, as an inductee into the 2019 edition of the Wash100 “” Executive Mosaic“™s annual selection of the most influential voices in the government contracting arena “” for his leadership in modernizing the U.S. Army enterprise.

Murray was confirmed by the Senate in August 2018 to lead the organization that aims to increase the efficiency and effectiveness of processes to deploy technology platforms necessary for the service to maintain a competitive edge.

Shortly after his appointment, Murray revealed the command will institute its own innovation laboratory, similar to the Defense Department“™s Defense Innovation Unit, to keep pace with advancements in local technology community offerings, specifically in artificial intelligence.

Murray said the Army should consider extending the tours of program managers and other personnel involved with the acquisition process. He said the culture needs to change because the traditional way of rewarding personnel is by promotion, and that comes by commanding organizations, not being associated with a program for a long time.

He appeared before the House Armed Services Committee readiness subcommittee in September and discussed his top priorities.

“My priorities are the synchronization of efforts across the entire modernization enterprise and to ensure that the enterprise is focusing on what“™s most important to the U.S. Army,“ he said.

Murray was commissioned as an infantry officer in the Army in 1982 after graduating from Ohio State University. He held many command positions during the past 27 years, including as director of force management at the Pentagon, the Joint Forces Command, the Joint Center for Operational Analysis and chief of staff for III Corps and Fort Hood.