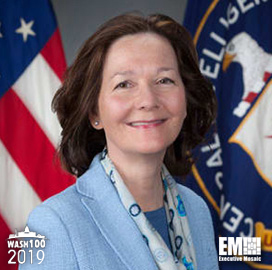 Executive Mosaic is honored to introduce Gina Haspel, director of the Central Intelligence Agency, as the newest inductee into the 2019 edition of Wash100 “” Executive Mosaic's annual selection of influential leaders in the government contracting arena “” for her efforts to improve the CIA as an intelligence service and diversifying the agency's workforce. This marks Haspel's first Wash100 award.

After 33 years with the CIA, Haspel was confirmed by the Senate in May 2018 to become the first female director of the agency in history. In her role, she oversees intelligence collection and analysis, covert action, liaison relationships with foreign services and counterintelligence operations. She succeeded Mike Pompeo, who assumed the secretary of state role in April.

At the swearing-in ceremony in May, she spoke about the CIA's need to constantly learn and improve as an intelligence service. She said the agency should strengthen its domestic and international partnerships, build up foreign language proficiency and deploy more officers to the foreign field.

“We also need greater focus and effort on the strategic threats our nation faces, as well as the persistent threat from global terrorism,“ Haspel said in her remarks. “As always, the key to our success against these challenges will be empowering the incredible talent that resides within CIA.“

In July 2018, she issued a statement on her leadership's commitment to a “diverse and inclusive workforce“ that enables the agency to carry out its global intelligence mission to forestall threats and advance U.S. national security goals.

“In doing so, each of us has a responsibility to promote a workplace free of harassment and discrimination that upholds our laws and values as Americans, allows all our officers to reach their full potential, and enables us to meet our critical mission,“ she noted.

Haspel joined the CIA in 1985 and has held senior leadership roles such as deputy director and interim chief of the National Clandestine Service. She is a recipient of numerous awards including the Presidential Rank Award, the Donovan Award, the George H.W. Bush Award for excellence  in counterterrorism and the Intelligence Medal of Merit.

Executive Mosaic congratulates Gina Haspel and the CIA for receiving the most coveted award in government contracting for the first time.