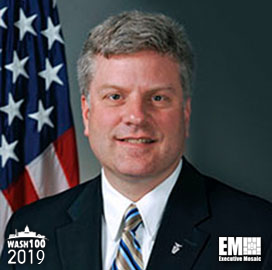 Executive Mosaic is pleased to announce that Steven Walker, director of the Defense Advanced Research Projects Agency, as an inductee into the 2019 Wash100 — Executive Mosaic’s annual selection of the most influential voices in the government contracting arena — for his focus on emerging technology such as artificial intelligence.

The two-time Wash100 Award winner holds more than 30 years of public sector experience, including more than a decade at DARPA in roles such as deputy director, director of the tactical technology office and the office’s program manager.

Walker said at House Armed Services Committee meeting last year that the agency would invest in cybersecurity, biosecurity and defense against weapons of mass destruction.

DARPA began working on the “second” and “third” waves of artificial intelligence technologies focusing on autonomous platforms and contextual reasoning adaptation throughout 2018. The initiatives provide AI tools with the ability to analyze massive data sets and help analysts with problem solving.

“We want to explore how machines can acquire human-like communication and reasoning capabilities with the ability to recognize new situations and environments and adapt to them,” Walker said.

Prior to taking the lead at DARPA in 2017, he served as the deputy assistant secretary of the U.S. Air Force for science, technology and engineering.

Walker developed the technology investment strategy for the service’s annual $2 billion science and technology program and led functional management of more than 14,000 military and civilian scientists and engineers.

Walker is a member of the Senior Executive Service and a fellow of the American Institute of Aeronautics and Astronautics. He received numerous awards including the 2014 AIAA Hap Arnold Award for Excellence in Aeronautical Management, the Presidential Rank Award, the Air Force Meritorious Civilian Service Medal, and DoD Exceptional, Meritorious, Distinguished Civilian Service medals.

Executive Mosaic congratulates Steven Walker and the DARPA team for receiving this award.