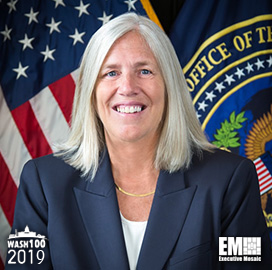 Executive Mosaic is pleased to introduce Sue Gordon, principal deputy director of national intelligence, as an inductee into the 2019 Wash100 “” Executive Mosaic's annual selection of the most influential voices in the government contracting arena “” for leading the efforts to develop new technologies and modernize the agency. This is her second consecutive Wash100 award.

Since August 2017, Gordon has overseen the intelligence community and the Office of the Director of National Intelligence to foster innovation, create new partnerships, expand outreach efforts and integrate intelligence operations. She joined ODNI after serving as the National Geospatial-Intelligence Agency's deputy director and working for the CIA in a number of leadership positions for 27 years.

During her time with the CIA, Gordon spearheaded the formation of the nonprofit company Q-Tel, which provides innovative technology to the agency and IC. In addition to her extensive intelligence sector experience, Gordon has also been recognized for her creative leadership through awards such as the Presidential Rank Award at the distinguished level.

Gordon has spoken about the importance of having an agency-centric community and how her leadership is focused on integrating the IC and spearheading efforts to retain U.S. supremacy particularly in space.

During an interview with The Cipher Brief in April, she discussed the ODNI's goal to develop new strategies, technologies and ways to collaborate with the private sector to remain one step ahead of the nation's adversaries.

“This is the dawn of creation. And all of us ““ government and private sector ““ are finding that this is hard,“ she added.

With regards to digital transformation, Gordon admits that the ODNI faces challenges such as understanding new technology and integrating the agency's multiple data sets. Despite the ODNI's modernization struggles, Gordon noted her optimism that new technology can be used for noble efforts such as promoting transparency and accountability.

When asked about being a leader in the IC under a divisive political climate, she underscored the importance of staying true to the community's values.

“If our work is not being represented, then we have an obligation, as we always have, to ensure they cannot, without our voice being part of it, be used differently“¦I would tell the intelligence community to do our job and for us as leaders to make sure that it can't be misrepresented.“

Executive Mosaic congratulates Sue Gordon and the ODNI team for receiving this award.