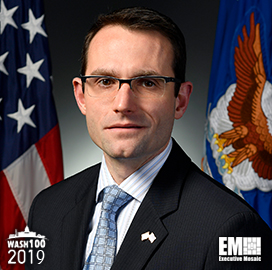 Executive Mosaic is pleased to announce that Dr. Will Roper, assistant secretary for the U.S. Air Force, was selected to join the 2019 edition of the Wash100 “” Executive Mosaic's annual selection of the most influential voices in the government contracting arena “” for his efforts to accelerate development of hypersonic weapons and for streamlining the contract award process for small businesses and technology startups.

As assistant secretary for acquisition, Roper advocated for changes to the military's contract award process for artificial intelligence developers. He said the Air Force wants to work with small businesses capable of modifying AI algorithms in coordination with software users. The Air Force can adapt AI to determine how the technology can be utilized in classified applications.

Roper is responsible for an annual budget in excess of $40B covering more than 456 acquisition programs. He also serves as the service acquisition executive for Joint Strike Fighter and as the principal advisor to the secretary and chief of staff of the Air Force.

He revealed that the Air Force plans to test a new contracting process to award contracts within a few days with the goal of accelerating contract awards to startups and small businesses. He said the process would involve startups presenting their ideas in a “90-second video-like Kickstarter.“

The Air Force awarded a potential 16-year, $9.2B contract to Boeing in September 2018 to build up to 275 T-X trainer aircraft and 120 ground-based training platforms. Boeing received the contract through a competitive acquisition process. Another contract was awarded the same month for $7.2B to Lockheed Martin to build 22 GPS III satellites with an initial liftoff date set for 2026.

Additionally, Roper expects the hypersonics program to reach an initial operational capability within three to four years. In July 2018, he supported testing to learn new insights about the technology. Two months later, the Air Force decided to purchase hypersonic weapons instead of procuring them in large quantities. Roper said the service branch was aiming for its Hypersonic Conventional Strike Weapon to be operating by 2020.

Previously, Roper was the inaugural director of the Pentagon's Strategic Capabilities Office. From August 2012 through February 2018, he helped the office grow from an annual budget of $50M to $1.5B based upon the 2018 budget with many new concepts scheduled including multi-purpose missiles, smartphone-navigating weapons and big data-enabled sensing.

Roper earned a bachelor of science and a master of science degrees in Physics from the Georgia Institute of Technology in 2001 and 2002. He also earned his doctorate in Mathematics in 2010 from Oxford University in England. Over his career, Roper has been honored with the Secretary of Defense's Award for Excellence, MDA Contractor of the Year Award, the Department of Defense Medal for Distinguished Public Service and other honors and awards.

Executive Mosaic congratulates Will Roper for receiving this award.