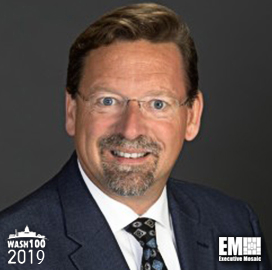 Executive Mosaic is pleased to introduce Chris Marzilli, executive vice president of General Dynamics Information Technology and Mission Systems segments, as an inductee into the 2019 Wash100 “” Executive Mosaic's annual selection of the most influential voices in the government contracting arena “” for his efforts building mission systems and earning multiple major contracts.

Marzilli officially assumed his new role on Jan. 1 after four years serving as president of General Dynamics Mission Systems. He succeeded Dan Johnson, who retired at the end of 2018.

“Marzilli has played a pivotal role in building the mission systems business, and in this new role he will ensure both businesses continue to expand and meet the needs of our customers, employees and shareholders,“ said Phebe Novakovic, chairman and CEO of General Dynamics.

The company received a five-year, $208.9 million contract in 2017 to build and test AN/USC-61(C) digital modular radio systems and high-frequency distribution amplifier group components for the Navy and a $104.9 million contract to manufacture common aviation command-and-control systems for the Marine Corps.

GDMS is working with NASA on the agency's Space Network Ground Segment Sustainment project. The initiative aims to improve operations of the Tracking Data Relay Satellite system that serves as the communications hub for U.S. low-Earth orbit satellites and space missions.

NASA expects to conduct the first operational readiness review of the hardware, software and engineering of the space network's ground segment in 2019.

Soon after Marzilli became executive vice president, the company secured a spot on an $898 million multi-award contract from the U.S. Navy. General Dynamics will compete for task orders to provide engineering and technical services for the operations of the Navy as well as the Marine Corps.

On Jan. 11, GDIT also announced it was selected by the Department of Defense to support the U.S. Joint Chiefs of Staff in joint force development training under a $501 million contract vehicle.

Executive Mosaic congratulates Chris Marzilli and the GDIT and GDMS teams for their selection.