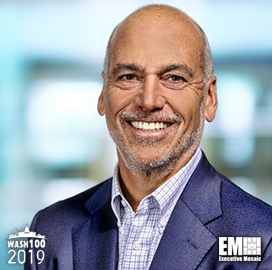 Executive Mosaic is honored to name David Zolet, president and CEO of the LMI, as an inductee into the 2019 Wash100 — Executive Mosaic’s annual selection of the most influential voices in the government contracting arena — for leading multiple acquisitions and providing innovative solutions to government issues.

LMI acquired the Tauri Group for an undisclosed sum to expand service offerings in the homeland security and defense sectors in February 2019. Zolet said LMI and Tauri “share an inclusive culture and commitment to excellence,” and LMI sought to purchase a company with experience in defense, preparedness, emerging technology and life sciences.

LMI, based in Tysons Corner, Va., helps the U.S. Postal Service manage its enterprise-wide projects, according to a previously awarded $100 million contract. The company provides USPS with methods to increase operational efficiency, address customer requirements, develop products and stay competitive in the industry.

“A contract of this size and scope requires collaboration between our newly established service lines, and our team is ready to tackle the opportunity,” Zolet said.

LMI is readying to work with the Centers for Medicare and Medicaid Services to support the development, implementation and management of healthcare under a potential $1.6 billion contract. The company will provide data collection and analysis to address gaps in healthcare quality, including cost and clinician burden.

In September 2018, LMI received one of its most significant awards, with an estimated value greater than $220 million, when it secured the prime task order to provide system acquisition lifecycle and engineering support services to the Program Management Office Directorate of the U.S. Border Patrol.

Zolet became the 11th president and chief executive officer for LMI in June 2017. He was appointed after serving as the executive vice president of CSC from Oct. 2014 to Apr. 2017, where he managed the firm’s Americas region.

“I have tremendous respect for LMI’s mission, capabilities, and people and am excited to be joining this outstanding team,” Zolet said. “I’m thankful for the chance to build upon LMI’s 55-year legacy of providing practical, innovative solutions toward government’s most pressing management problems and opportunities.”

He previously led the national public sector for CSC as executive vice president and general manager from June 2012 to October 2014. Zolet served as a vice president and partner of systems integration at IBM from 2009 to 2010. He also worked for Northrop Grumman IT between 2006 and 2009 in a variety of leadership positions.