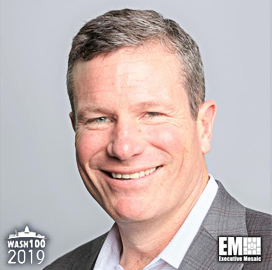 Executive Mosaic is glad to unveil Steve Harris, senior vice president and general manager of Dell EMC's federal business, as an inductee into the 2019 Wash100 “” Executive Mosaic's annual selection of the most influential voices in the government contracting arena “” for leading the company’s efforts to help federal clients modernize IT infrastructure, improve cybersecurity posture and transition to cloud-based platforms.

He is actively promoting the use of the cloud across the federal government and industry. In an interview with ExecutiveBiz, Harris said a significant change occurred during the past two decades in how agencies and companies look at cloud computing. He said Dell adapted to the changes as it expanded services through its subsidiaries such as Pivotal, RSA, SecureWorks, Virtustream and VMware.

He emphasized that the government needs a multi-year strategic plan to guide how agencies prioritize applications and workloads. Harris noted that agencies should transform how employees engage with technological platforms to improve their cybersecurity posture and establish their IT infrastructure based on a secure-by-design method.

“The ongoing nature of digital transformation requires a workload-by-workload analysis of how an agency is going to deliver capabilities to its end users,“ he said.

Dell EMC launched multiple projects intended to help the government modernize its IT efforts in 2018. The company partnered with BAE Systems to offer a hybrid cloud platform to federal agencies which would provide users access to mission-critical tools and help them collaborate through common applications.

The company worked with Microsoft to integrate Dell EMC Cloud and Azure Stack to give agencies the flexibility in using the cloud for various workload and mission requirements. Harris also announced that a mobile security platform from Booz Allen Hamilton may soon be deployed across Dell's mobile computers.

“The pairing [with Dell mobile computers] represents an ideal marriage of hardware, firmware, operating system and applications to create a tightly secured system,“ he said.