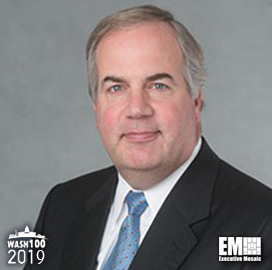 Executive Mosaic is honored to introduce Matthew Desch, CEO of Iridium Communications, as an inductee into the 2019 Wash100 “” Executive Mosaic“™s annual selection of the most influential voices in the government contracting arena “” for his efforts growing revenue and continued growth for the company.

This marks the fifth consecutive Wash100 award for Desch.

Iridium launched the final and eighth batch of NEXT satellites on Jan. 11, completing its launch campaign with SpaceX. The partnership deployed a total of 75 new satellites over less than two years.

Previously, Desch said during an interview with ExecutiveBiz that the company expected to start a financial transformation by end of 2018 and to see results by early 2020s.  He said the effort would give Iridium greater flexibility to do equity-friendly activities and to make future acquisitions.

The CEO cited the company“™s increasing satellite constellation in orbit is expected to contribute to its strong revenue and continued growth. Desch said Iridium now has 1M subscribers using its connection and the company established hundreds of partnerships within the commercial sector to further promote its services.

In the third quarter of 2018, the firm“™s total number of subscribers grew to 1.09M, which indicated a year-over-year increase of 15 percent. During the same period, Iridium also saw a $136M revenue, a record 17 percent higher than the prior year period.

Meanwhile, as the company completes its Iridium NEXT satellite constellation, the CEO said he expects the firm to start a capex holiday over a 10-year period.

“I know the history of other satellite operators regarding capex holidays isn“™t so good, but our motivations are very different,“ Desch said in an event in July. “Our network is flexible, and our new satellites have been designed to support the growth and market opportunities in the future.“

Desch has more than 25 years of experience in the global wireless industry and over 35 years in telecommunications management. He joined Iridium in 2006 and his leadership has more than quadrupled the operational earnings for the company. Desch began his career with AT&T Bell Laboratories in software development and served as the CEO of Telcordia Technologies, a major supplier of software and services in the telecommunications industry. He also worked for Nortel Networks for 13 years before leaving in 2000.

In 2011, Desch was appointed as a member of the National Security Telecommunications Advisory Committee. He also serves on the board of trustees of the Aircraft Owners and Pilots Association, as chairman of Airspan Networks and as a member of the Board of Directors at SAIC.