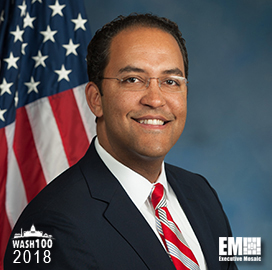 Rep. Will Hurd Receives 2018 Wash100 Award for his Government Reform and IT Modernization Initiatives Executive Mosaic is honored to introduce Rep. Will Hurd (R-Texas) as an inductee into the 2017 edition of the Wash100 — Executive Mosaic’s annual selection of influential leaders in the government contracting arena — for his work with the intelligence community on government IT modernization.

Hurd was elected to Congress in 2015 and currently serves as chairman of the Information Technology Subcommittee, vice chair of the Border and Maritime Security Subcommittee and member of the Committee of Oversight and Government Reform and the Committee on Homeland Security.

He was also appointed to serve on the  House Permanent Select Intelligence Committee to replace Mike Pompeo, who was named CIA director.

Hurd said in an article posted Dec. 18 that his priority in 2017 is to find ways to improve the lives of his constituents, which includes the passage of his government information technology reform bill called the Modernizing Government Technology Act.

The MGT Act is designed to address the federal government’s spending on the maintenance of old and outdated IT systems, partly through a central IT modernization fund.

Hurd wants to evaluate the proposed central modernization fund through the Federal Information Technology Acquisition Reform Act scorecard, which is used to evaluate the performance of government IT platforms.

He told the audience at the Washington Post Cybersecurity Summit in October that the MGT Act is intended to boost transparency and integrate security into a product throughout its lifecycle “rather than thrown in as an afterthought.”

The lawmaker also urged Congress in July to fund the Customs and Border Patrol‘s deployment of smart technologies to secure the U.S.-Mexico border, instead of supporting the construction of a border wall.

Hurd reiterated ina Dec. 11 interview with MSNBC that a “smart wall” will be more effective than a physical wall in addressing U.S. border security issues.

He also told NPR in November that the government should work with technology companies to help mitigate foreign actors’ efforts to influence U.S. elections.

Executive Mosaic congratulates Representative Hurd and his team for their selection to receive this award.