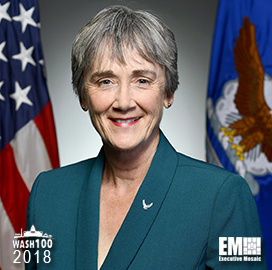 Executive Mosaic is honored to induct 24th Secretary of the U.S. Air Force Heather Wilson into the 2018 edition of the Wash100 — Executive Mosaic’s annual selection of influential leaders in the government contracting arena — for her leadership in modernizing the service branch.

Wilson recently addressed the state of the Air Force at the Joint Base Pearl Harbor-Hickam on Feb. 1, during her first official trip to the region, with additional stops in Guam, the Philippines, South Korea and Japan. Speaking with the Honolulu-Star Advertiser, she cited a National Defense Strategy report released at the start of 2018, commenting that the United States “has returned to an era of great power competition,” and for the Air Force, “the pacing threat, really, is China.”

“[China] is rapidly modernizing and we need to prepare to be able to protect our vital national interests in a highly contested region,” Wilson noted. She says the five-year goal is to steadily grow the Air Force, which lost 30,000 people due to sequestration. “The fiscal 2019 budget is looking like it will [emphasize] restoring the lethal capacity of the USAF,” Wilson added. “[It] will include continued modernization of the force and additional purchases of everything from [refueling] tankers to F-35s to the continued development of the B-21 bomber.”

At her swearing-in ceremony last May, she said, pledging her support for service members,  “As airmen, you are the innovators. You stand ready every hour of every day on every continent, ready to protect the country that we love.”