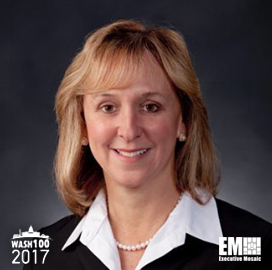 Executive Mosaic is glad to announce Carey Smith, president of the federal group at Parsons, as an inductee into the 2017 Wash100 — Executive Mosaic’s annual selection of the government contracting arena’s most influential voices.

Smith was appointed to the role in November 2016 and holds the distinction as the highest-ranking female business unit executive at the Pasadena, Calif.-based engineering and infrastructure services provider.

Parsons’ federal business holds contracts with agencies for services in areas such as defense, environmental, infrastructure, security and intelligence.

Her career prior to Parsons includes leadership roles with Honeywell Aerospace including president of its defense and space business, vice president of customer and product support and president of the former Honeywell Technology Solutions.

She is also a former vice president of technical services at Lockheed Martin.

Smith currently serves as secretary of the Professional Services Council‘s board of directors and in December 2016 was chosen for another term with the council’s executive committee.

“We are at a critical moment in the government services sector, as we work to defend our nation against cyber threats and rebuild our infrastructure. I look forward to developing the communication and cooperation between government and industry needed to achieve our common goals,” Smith said.

In February, Parsons received a contract to provide program management services for a project to update an office at NASA‘s Jet Propulsion Laboratory in Pasadena, California along with architectural design and construction management support.

Parsons’ Secure Mission Solutions subsidiary is one of six businesses to receive prime positions on a potential five-year, $460 million contract vehicle awarded in May 2016 by the General Services Administration for support services to U.S. Cyber Command.

Executive Mosaic congratulates Carey Smith and the Parsons team for their selection to receive this award.