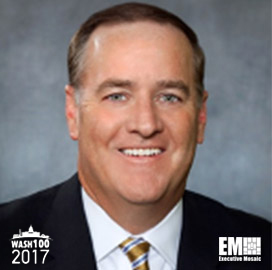 Executive Mosaic is glad to announce Bill Rowan, vice president of federal sales at VMware, as an inductee into the 2017 edition of the Wash100 — Executive Mosaic’s annual selection of influential leaders in the government contracting arena.

The two-time Wash100 inductee was appointed to his current position in November 2014 after nearly five years as VP of the cloud and virtualization company’s defense and intelligence sales organization.

In September, the Defense Information Systems Agency rolled out a Security Technical Implementation Guide for VMware’s NSX software-based networking platform for use in Defense Department networks.

VMware subsequently reported the release of a DISA STIG for its AirWatch 9.X product offering.

“Federal agencies and security-conscious organizations alike look to STIGs as a guideline to create the most secure enterprise mobility management deployments,” said Rowan.

“This STIG validates that security is at the core of AirWatch and customers across the Department of Defense and other high-security environments can assuredly deploy the leading EMM solution.”

In an article written for GCN Magazine, Rowan said the use of hybrid cloud platforms can help federal agencies manage, secure and monitor critical information technology applications and workloads.

The 27-year industry veteran’s career includes roles at other technology vendors such as IBM, MicroStrategy and Storage Technology Corp.

Executive Mosaic congratulates Bill Rowan and the VMware team for their selection to receive this award.