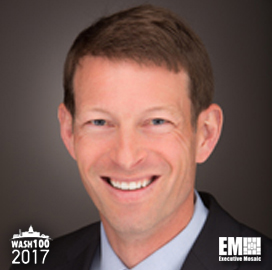 Executive Mosaic is honored to introduce Rob Davies, executive vice president of operations at ViON, as an inductee into the 2017 edition of the Wash100 — Executive Mosaic’s annual selection of influential leaders in the government contracting arena.

The 25-year information technology industry veteran is in charge of the Herndon, Va.-based IT services contractor’s solution development, cloud and infrastructure-as-a-service offerings and professional, managed and support services.

Davies recently spoke to ExecutiveBiz for an in-depth conversation on cloud computing trends and highlighted the role of industry to drive the technology forward on behalf of public sector organizations.

“We need to look at workloads and take into consideration variables like current platform, language, integration with other systems, databases, capacity, transactional volume, network use, to help put the right workload on the right platform or in the right cloud.”

He also told Meritalk in a January interview that the use of energy efficiency equipment in data centers can help federal agencies to comply with the requirements of the proposed Energy Efficient Government Technology Act.

Davies joined ViON in May 2014 as vice president of capacity services after he managed the public sector services group at CA Technologies, which he joined upon CA’s purchase of Base Technologies.

Base Technologies is an IT management consulting business he led for 16 years as its president and CEO.

Executive Mosaic congratulates Rob Davies and the ViON team for their selection to receive this award.