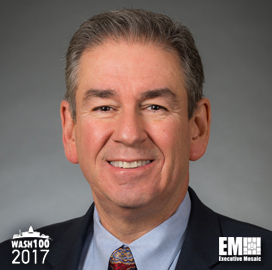 Executive Mosaic is honored to announce Dave Wajsgras, president of Raytheon‘s intelligence, information and services business segment, as an inductee into the 2017 edition of the Wash100 — Executive Mosaic’s annual selection of influential leaders in the government contracting arena.

Wajsgras transitioned to the leadership role over the Dulles, Va.-based IIS business in March 2015 after nine years as Raytheon’s chief financial officer.

In February of this year, Raytheon moved to combine its cyber threat hunting, managed security and automation services with Utilidata’s cyber attack detection and response knowledge under a strategic alliance that seeks to help power utilities defend and respond to cyber threats.

Wajsgras said then that the company aims to expand its presence in the critical infrastructure market with the delivery of defense-grade cybersecurity capacity to power utilities.

Four months prior to that announcement, Raytheon and the National Cyber Security Alliance released a joint survey that found  millennials aged 18-26 years old think that social and political “hacktivism” increases the need for more cyber talent and updated cybersecurity system.

“As cyber becomes even more tightly woven into the fabric of our national security, the rising demand for cyber talent will continue to outpace the growth of our cyber workforce, leaving a gap that must be filled… Technology is clearly part of the answer; but continuing to focus on skilled talent is vital,” Wajsgras wrote in a Federal Times article published in November 2016.

For an October 2016 blog post, he wrote that the U.S. needs a “proactive and collective effort” to address future cybersecurity needs and that all stakeholders should work to reinforce the right resources and talent in order to secure the cyber infrastructure.

In August 2016, Raytheon announced the launch of a new facility in Augusta, Georgia, that will serve as a center for the firm’s cybersecurity services to the U.S. Army Cyber Command and provide cyber offerings to other Defense Department agencies.

Wajsgras said then that the new Georgia facility aligns with the company’s efforts to support DoD agencies in the areas of cyber hardening, computer network defense and training.

Wajsgras’ career prior to Raytheon includes time as chief financial officer at Lear Corp. and prior to that in other leadership roles at Engelhard and Honeywell International.

Executive Mosaic congratulates Dave Wajsgras and the Raytheon team for their selection to receive this award.