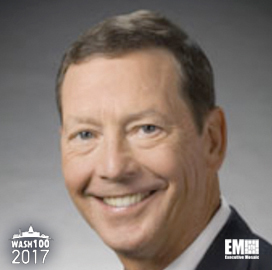 Executive Mosaic is glad to recognize Dan Johnson, executive vice president of the information systems and technology segment at General Dynamics as an inductee into the 2017 edition of the Wash100 — Executive Mosaic’s annual selection of influential leaders in the government contracting arena.

This represents the third consecutive Wash100 selection for Johnson, who assumed the IS&T EVP role in January 2015 as an addition to his position as president of the General Dynamics Information Technology business unit.

In a June 2016 interview with Washington Technology, Johnson said he viewed cybersecurity and intelligence as potential growth areas for the Falls Church, Virginia-based defense and government services contractor.

In addition, the Defense Security Service presented a James S. Cogswell Award to General Dynamics in recognition of security practices at four of its facilities.

Johnson served as chief operating officer of Anteon prior to its purchase by General Dynamics in 2006 and holds 28 years of experience from KPMG and BearingPoint.

Executive Mosaic congratulates Dan Johnson and the General Dynamics team for their selection to receive this award.