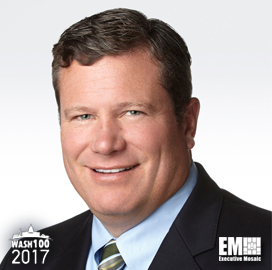 Executive Mosaic is honored to introduce Steve Harris, vice president and general manager of Dell EMC’s federal business, as an inductee into the 2017 edition of the Wash100 — Executive Mosaic’s annual selection of influential leaders in the government contracting industry.

Harris assumed his current role at Dell Federal Systems in 2014, where he is responsible for the company’s implementation of information technology platforms and services for U.S. federal government and military customers.

In September, Dell and EMCwrapped up their $67 billion cash-and-stock merger to establish enterprise information technology company Dell Technologies that seeks to offer clients a portfolio of tech platforms in cybersecurity, hybrid cloud and data analytics, among other areas.

Dell EMC is one of the businesses that now operate under the Dell Technologies brand and in November released a survey that says 91 percent of federal IT leaders consider cloud computing as the top technology trend at their agencies.

He added that such technology tools could help agencies change the way they do business and interact with citizens.

In a June 2016 interview with FierceGovernmentIT, Harris said the proposed $3.1 billion IT modernization revolving fund would complement the implementation of the Federal Information Technology Acquisition Reform Act.

The 19-year Dell veteran served as assistant vice president of the company’s state and local government and education business for five years prior to his appointment in the federal systems group.

He also served in other senior leadership posts at the company such as public business group executive, account manager and region sales director for the company’s SLED organization and healthcare customers.

Executive Mosaic congratulates Steve Harris and the Dell team for their selection to receive this award.