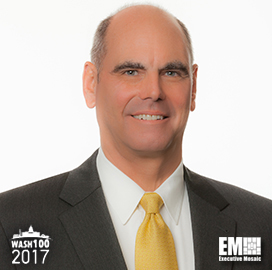 Executive Mosaic is honored to introduce Dave Buss, president of Cubic Corp.‘s global defense business, as an inductee into the 2017 edition of the Wash100 — Executive Mosaic’s annual selection of influential leaders in the government contracting arena.

Buss was promoted to his current role for the $875 million segment in May 2016 and subsequently also took a senior vice president title.

He joined Cubic in June 2015 as vice president and deputy to the president of the global defense segment after more than 36 years in the U.S. Navy, where he served as commander of the Naval Air Forces.

Buss told Inside Defense in October 2016 Cubic is focused on performance-based training products and the company works with military customers to define readiness standards.

“If we can provide more readiness output for the same or [fewer] dollars invested… then the value increases,” he said at the time.

Cubic received a five-year, $20 million task order from the Space and Naval Warfare Systems Center Pacific in October 2016 to provide operational support for the U.S. Pacific Command‘s Center for Excellence in Disaster Management and Humanitarian Assistance.

Executive Mosaic congratulates Dave Buss and the Cubic team for their selection to receive this award.