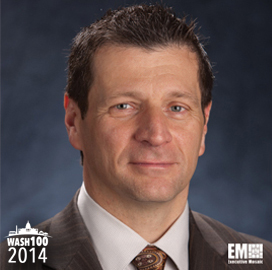 Executive Mosaic is honored to announce David Dacquino, president and chief executive at SkyLink Aviation, as the newest inductee into the Wash100, the premier group of leaders who drive innovation and growth at the intersection of the public and private sectors.

The more than 30-year defense and aviation veteran said he joined the aviation and logistics services provider because he believed in the company’s trajectory and was drawn by its 26-year legacy of delivering on complex missions.

“Joining SkyLink was the right career move for me because of the exciting challenge it offers to lead this company with a fascinating legacy in aviation into the next era which as we all know will present very complex economic and geopolitical issues for all companies that compete globally,” he told GovCon Exec. Dacquino has served in a number of leadership roles at GovCon firms during his career, including vice president and lead executive of Raytheon Technical Services Company‘s integrated support solutions division and vice president and general manager of logistic services at Lockheed Martin.

“I spent a lot of my career in large companies – Lockheed Martin for 20 years, Raytheon for seven – and transitioned to VT Group as CEO,” he told ExecutiveBiz when he moved to SkyLink. Dacquino will now attempt “to take the company to the next level, put in the processes and diversify into new areas,” he said.

“Clearly the opportunity to get on site and up close with our customers whether in Afghanistan with the warfighter or in Greece with the firefighter where we do aerial fire suppression. This experience and the progress we have made inside the company to prepare for our new markets is very motivating,” he said.

The company works in remote and treacherous environments including Somalia, Peru, Afghanistan, Iraq, Sudan and Uganda. “SkyLink is a company that does the last mile – that real hard piece that larger companies can struggle with. We’re the ‘first in the air, first on the ground’ kind of company. So, I thought, what a great partner we would be for those larger companies,” Dacquino said.

“After having lived in those companies for that long, that’s the bridge I hope to make,” he added.