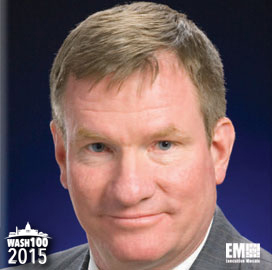 Executive Mosaic is glad to unveil Bradley Feldmann, president and CEO of Cubic, as the newest inductee into the Wash100 — a group of influential leaders in the government contracting industry.

Feldmann became president and CEO of the San Diego-based defense contractor in July 2014 after a two-month transition of the roles from the now-retired William Boyle, who led the company on an interim and full-time basis after founder and CEO Walter J. Zable died in June 2012.

Zable’s legacy at Cubic and in the defense industry, as well as Feldmann’s goals for Cubic were among the topics in his wide-ranging interview with ExecutiveBiz conducted after the transition.

“He grew the company from a small San Diego electronics company to more than a billion dollars in revenue with very little outside-invested capital. Walter was a great leader with a true entrepreneurial spirit that left Cubic with a legacy of hard work and innovation,” Feldmann said.

The company’s transportation business and defense footprint will also be focus areas for him going forward, he said.

“We also have aspirations to grow our special operations and C4ISR businesses in our defense business and mission support services business segments.”

Feldmann served as Cubic’s chief operating officer before his appointment to CEO and has also led the company’s defense systems business.

Executive Mosaic offers its congratulations to Bradley Feldmann and the Cubic team for their selection to receive this award.