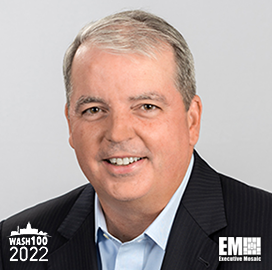 Executive Mosaic is pleased to announce Paul Dillahay, president and CEO of NCI Information Systems, as an inductee into the 2022 edition of the Wash100 Award for his efforts in leading the company’s major contract wins, adoption of artificial intelligence and other emerging technologies as well as partnership with the academe.

Dillahay is among selected executives and officials who demonstrated significant government contracting contributions over the past year. Visit Wash100.com to vote for Dillahay and other executives you want to advocate for.

The recognition marks the fourth overall Wash100 Award for the NCI chief executive. His previous wins highlighted his effort for driving the company’s development of AI and IT capabilities and growth in revenue and federal sector footprint.

In the same month, Dillahay spoke with ExecutiveBiz about the GSA Digital Innovation for GSA Infrastructure Technologies task order. He discussed during the Executive Spotlight interview how the major win could impact the company heading into the new year.

“A contract of this size will accelerate our momentum. What had been some headwinds in 2020 have now become tailwinds as we move into the new year. Our artificial intelligence solutions have been adopted by our industry and federal customers, which has set us up for a very strong 2021.”

He also talked about the company team and industry partners that support its contract award.

“Our [AI as a service business model] is directly related to how we proposed on DIGIT. There’s a level of staff support that the contract requires… In some instances, those will be NCI tools, and other instances, they’ll be either current partners’ tools or tools that we discover over the life of the contract that we believe will be the best of breed to bring to GSA.”

In August, NCI was also selected to compete for task orders under the U.S. Navy’s SeaPort Next Generation acquisition vehicle, which has a remaining value of $7.5 billion.

The required services are for ensuring the security, modernity and reliability of Navy and Marine Corps systems, assets and platforms, and NCI will leverage AI and other technologies on the effort.

Another major contract win for NCI was announced in September. It secured a five-year, $112 million contract extension from the Centers for Medicare and Medicaid Services for the Comprehensive Error Rate Testing program.

On the subject of the adoption of emerging technologies to empower the federal workforce, Dillahay said that over the last few years, NCI has worked to become a bridge between commercial innovation and adaptation to government requirements.

“We started down this path very early on, as part of our transformational journey to become a trusted systems innovator in the public sector. Because of that, we have had an increased focus on AI and the ability to get commercial technologies prepared for the authority to operate processes, procurement processes and integration into programs. We have had a very large head start because we went all in on AI from the beginning.”

“With more than half of our business in direct support of the Department of Defense and its missions and 20 percent of our team members having served in uniform, service to our great nation is an enduring part of NCI’s culture,” said Dillahay.

The 2022 Wash100 inductee has served with NCI for more than five years. He has over two decades of experience in the government IT services sector, which he uses as he oversees all company operations and leads growth strategy development and execution.

Executive Mosaic congratulates Paul Dillahay and NCI Information Systems on their Wash100 Award. Dillahay’s expertise and strong leadership position him as a significant executive in the GovCon sector throughout the year.