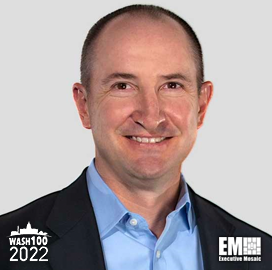 Executive Mosaic is honored to introduce Dan Jablonsky, president and CEO of Maxar Technologies, into the 2022 Wash100 class of leaders who have grown in prominence throughout the government contracting sector for driving innovation and executing strategic vision.

“Dan Jablonsky has a unique ability to focus on Maxar’s never-ending goal of providing the highest resolution satellite imagery products and GEOINT platform,” said Jim Garrettson, CEO of Executive Mosaic and founder of the Wash100 Award.

“3D navigation, natural disaster support, GPS for fighter jets and even scanning asteroids for metals and rare earth demonstrate how one of the most focused leaders in the GovCon business is also one of the guys with the widest field of view for leading Maxar’s strategy into the future,” Garrettson added.

Maxar, featured on Arlington Magazine’s Best Places to Work list, reported full 2021 revenue grew by $47 million to $1.77 billion from 2020 figures and attributed the growth primarily to sales from its Earth intelligence and space infrastructure segments.

“As we look to 2022 and beyond, we remain focused on execution and on making investments across both Earth Intelligence and Space Infrastructure that we believe will position us well to continue to meet our customer’s critical mission needs into the future,” Jablonsky said in an earnings statement.

The Westminster, Colorado-based company is preparing to deploy its WorldView Legion fleet of next-generation satellites to capture Earth observation imagery at a very high 30-centimeter resolution for government and commercial customers.

“We remain on track for first launch in the March to June window of 2022 and we continue to expect the remainder of the constellation will launch three to six months after the first,” Jablonsky told investors in November.

Under his leadership, Maxar has continued to build geostationary communications satellites while pursuing opportunities to expand its civil and defense business. The company signed a $60 million contract in August to help the National Geospatial-Intelligence Agency manage a classified big data analytics program and secured a pair of options last year on the potential $900 million EnhancedView Follow-On service level agreement with the National Reconnaissance Office and the NGA’s $176 million Global Enhanced GEOINT Delivery contract.

“The G-EGD platform provides U.S. and allied users with access to geospatial intelligence from a variety of industry providers at locations around the globe,” Jablonsky said in October.

Additionally, the company secured a $48.3 million contract to provide geospatial intelligence support services to the U.S. Army and delivered 3D data products and satellite imagery to the Australian defense department under multimillion-dollar deals.

Longtime customer SiriusXM placed new orders for two more geostationary communications satellites after SXM-8, built by Maxar, completed in-orbit testing in July 2021. Also in that month, the satellite builder joined the Space Force Association as a founding member with the intent to contribute research, analysis and expertise to decision-makers on U.S. space policy, strategy and acquisition.

In his Satellite 2021 keynote speech, Jablonsky said rapid advances in space commercialization and the strategic importance of space in national security missions are driving sector investments.

“It’s very expensive to get to space, to operate in space. But it’s doable and commercial companies are pushing the edge really fast these days,” the first-time Wash100 inductee told the Atlantic Council in February of last year.

Jablonsky started his career in the U.S. Navy as a surface warfare officer and nuclear engineer before joining the private sector. He worked as an attorney at O’Melveny and Myers and the U.S. Securities and Exchange Commission and taught law at the University of Denver as an adjunct professor.

Executive Mosaic congratulates Dan Jablonsky and the Maxar organization on their Wash100 selection. Cast a vote for him as one of your favorite influential executives at the intersection of public and private sectors.