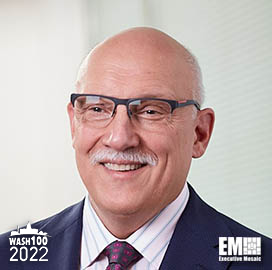 Executive Mosaic is honored to again induct Stu Shea, chairman, president and CEO of Peraton, into the prestigious Wash100 Award for 2022 – an award which is annually bestowed upon the top 100 “executives of consequence” within the government contracting community as recognition of invaluable contributions across the federal landscape and most importantly, in anticipation of continued distinction in the year ahead.

This meritorious accolade marks Shea’s sixth year of recognition, following his win in 2021 for spearheading company expansion through strategic acquisitions and securing an array of technology, maintenance and support contracts from government and military customers.

There is still time to visit Wash100.com to cast your vote for Peraton’s Stu Shea and learn more about the history of the coveted Wash100 Award.

“Stu Shea is an executive of grand ambition, demonstrated by the amalgamation of Peraton into one of Virginia’s largest privately owned companies through the strategic integration of Peraton with the former Northrop Grumman IT services business and Perspecta, along with six other GovCon industry players,” commented Jim Garrettson, CEO of Executive Mosaic and founder of the coveted Wash100 Award.

“Knowledgeable observers will take particular note in this amalgamation – Stu has seized the helm of one of his previous employers, Northrop Grumman Intelligence, reminding us all that life steers those in motion toward ever-expanding circles,” Garrettson continued.

Garrettson added, “Fortunately for Peraton, they will be moving to a new headquarters in Reston, VA in September 2022, providing the much needed space to absorb the expansion that GovCon’s marketplace is anticipating from Stu and his ambitious roadmap for Peraton. Along with the rest of the GovCon market and this year’s flight of Wash100 winners, we will watch assiduously, and with great anticipation, Shea’s emerging plans, appetite for growth and predisposition for acceleration…buckle up!”

In December 2021, at the close of what Shea called “a year of transformational expansion for Peraton,” the company announced its plans to construct a new custom-built corporate headquarters located in Reston, Virginia. The new facility, built to accommodate the company’s rapid growth, will house three of Peraton’s business units as well as its Mission Capability Innovation Center.

Shea said of the new location, “As we have grown to become the nation’s leading mission capability integrator and the fourth largest privately owned company in Virginia, we have acquired employees and offices based all over the U.S.” Peraton now has over 150 offices and 19,000 employees across the country.

He added that the company is emerging from a six-month period focused primarily on integration, and it is setting its sights on a new chapter. “We are now ready to move forward in 2022 as One Peraton,” Shea said.

The company’s most recent acquisition was the purchase of ViON’s as-a-Service cloud business in September 2021; the merger added cleared personnel, key leaders and contracts with the Department of Defense, civilian agencies and state governments to Peraton’s enterprise.

The DHS contract win and ViON cloud business acquisition cap off a series of important growth initiatives, strategic acquisitions and key contract awards for Peraton throughout 2021.

The second half of 2021 saw Peraton’s win of key contracts, including a $2 billion enterprise IT services integrator blanket purchase agreement from the Defense Health Agency; a $979 million task order to strengthen the U.S. Central Command’s information operations capabilities; and a $121 million award to develop spacecraft and airborne electronic system prototypes for the U.S. Navy, among other awards.

Additionally, Peraton took over Perspecta’s $500 million other transaction agreement contract from the Defense Counterintelligence and Security Agency in June 2021.

Peraton kicked off the first half of 2021 with two noteworthy mergers. Veritas announced its $7.1 billion acquisition of Perspecta in January 2021, and the New York-based private-equity firm closed its $3.4 billion purchase of Northrop Grumman’s information technology and mission support services business less than one month later; both entities combined with Peraton, initiating a new era of growth and transforming Peraton into a next-generation national security company with federal clients across a multitude of key industries.

The integration of Perspecta – and the later integration of Northrop Grumman’s IT business after the deal’s closure in May 2021 – with Peraton led Shea to initiate transformational reorganization efforts that resulted in the creation of nine new business units and restructured the enterprise’s executive leadership team.

Peraton also launched its mobile robotic systems subsidiary, Remotec in March 2021 in a move that strengthened the enterprise’s offerings in unmanned surface, ground and underwater domains.

The company closed out the first half of 2021 with an additional $483 million in classified contracts that represented new and expanded work across the space, intelligence, federal and cyber markets.

Stu Shea’s vision and guidance has steered Peraton’s performance and defined its culture since 2017. Shea was named CEO of MHVC, formerly Harris Corporation’s Government Services business, in June 2017 following the company’s sale to Veritas Capital. Shortly after Shea’s appointment to the role, he rebranded the company as Peraton.

Executive Mosaic congratulates Stu Shea and the Peraton team for their induction into the 2022 Wash100 class and for their significant impact – past, present and future – across the GovCon landscape.