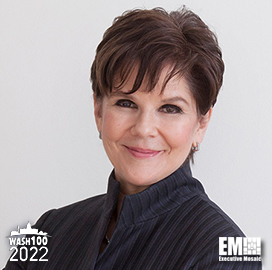 Executive Mosaic is honored to announce Phebe Novakovic, chairman and CEO of General Dynamics, as a 2022 Wash100 Award recipient to recognize her deep conviction that the defense industry plays a vital role in bringing advanced technologies to the military.

This marks her eighth Wash100 win in the nine-year history of Executive Mosaic’s annual selection of the most influential government contracting figures in the public and private sectors.

“The guys at Mission Systems know how to run their product portfolio, and the guys at GDIT know how to manage their IT services business. And I think those areas of expertise, it’s very important to keep them separate from a management point of view. But to have them come together to work more seamlessly, we believe this reporting structure helped, but in no other respects are we changing anything,” the eight-time Wash100 winner told investors in a January 2021 earnings call.

Under her leadership, General Dynamics landed major contracts with defense agencies. The company was awarded a position on a 10-year, $4.445 billion contract for security services to the U.S. Air Force’s Special Access Program.

The company’s IT segment provides help desk services to the Joint Base Anacostia-Bolling in Washington, D.C., and other Defense Intelligence Agency facilities through a 10-year, $829.2 million task order awarded in November. Aside from its work with U.S. military customers, GDIT will also support user-facing and data center systems on multiple networks and security domains for the National Geospatial-Intelligence Agency under a contract worth potentially $4.5 billion over 10 years.

Electric Boat, the defense contractor’s subsidiary that makes underwater vessels for the U.S. Navy, received a potential $2.4 billion contract in March to build one Block V Virginia-class submarine equipped with Virginia Payload Module. In a June interview with The Wall Street Journal, Novakovic said submarines “are securing our borders every day in ways you don’t even know because they can’t be found.”

Novakovic took the helm of General Dynamics on Jan. 1, 2013, and became one of three women at the time to hold the CEO post at a major U.S. defense company, including Linda Hudson of BAE Systems Inc. and Marillyn Hewson of Lockheed Martin.

During an August interview on “The David Rubenstein Show,” Novakovic said that contractors providing support to the Department of Defense have a critical responsibility.

“I think that we are all responsible and we have an obligation to find the latest and best technologies that we can for our customers and deliver them the most cost effect manner that we can. And I think that’s a challenge and an opportunity for all big defense companies,” she told Rubenstein.

Executive Mosaic congratulates Phebe Novakovic and the rest of the General Dynamics organization on their 2022 Wash100 Award. Cast a vote for Novakovic as one of your 10 favorite GovCon leaders via Wash100.com.