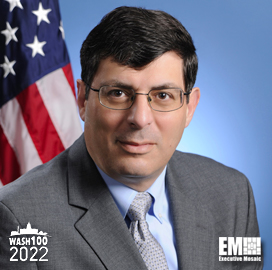 Executive Mosaic is honored to present Christopher Scolese, director of the National Reconnaissance Office, with the 2022 Wash100 Award in recognition of his efforts in leading the agency as it continues to deliver intelligence, surveillance and reconnaissance data to the intelligence community, Department of Defense and other space-based content recipients.

This marks the third consecutive year Scolese was inducted into the Wash100. His two previous awards underscored his leadership in NRO’s COVID-19 response and relief, space exploration and information technology capability development efforts as well as his sector and federal landscape contributions.

Visit Wash100.com to cast a vote for Scolese as one of your favorite government contracting leaders.

Scolese, who was sworn into office in August 2019 following presidential appointment and Senate confirmation, was one of the key persons who formalized end-to-end space operations between DOD and IC. In August 2021, he announced that NRO, the National Geospatial-Intelligence Agency, the Space Force and Space Command reached an agreement that sets mission boundaries for all involved organizations.

“In practical terms, [the Protected Defense Strategic Framework] defines and deconflicts each of our roles. It drives consistent and deliberate coordination at multiple levels,” Scolese explained during a yearly space-focused event.

Speaking at the annual Space Symposium, he added that the framework is aimed at establishing crisis planning and “collaboration on all space security matters” as well as enhancing communication among space organizations.

In another event, the NRO director expressed his belief that commercial technology will contribute to the future of the agency’s space architecture considering the constant changes in the threat landscape. Scolese said during a Washington Space Business Roundtable gathering that commercial capabilities will be acquired, adopted and, in some cases, used in place of traditional technologies at the agency.

Satellite imagery is another area where NRO is tapping the commercial sector for help. The agency announced a non-traditional contracting framework in October 2021 to potentially acquire commercial satellite technologies for imagery and data collection.

In November, the agency posted a solicitation for an electro-optical commercial layer in support of its delivery of imagery to the national and military IC. According to NRO’s request for information, the next generation of commercial imagery is aimed at specifically meeting the mission requirements of its user communities.

Aside from the said initiatives, NRO also welcomed a new deputy director in August. Maj. Gen. Donna Shipton has almost three decades of Air Force leadership and experience, and now serves as deputy director and commander of the Space Force Element.

Other NRO activities under Scolese’s leadership were the launches of NROL-82 and NROL-111 missions in April and June, respectively.

“Space is an increasingly contested domain as our adversaries become more threatening and capable. To meet this challenge, we are expanding our commercial partnerships, adapting processes to innovate faster and incorporating resilience from our assets on the ground to our systems on orbit,” commented Scolese on NROL-82, the first mission in 2021 and the 31st launch in partnership with United Launch Alliance.

NROL-111, the final liftoff for the year, was launched aboard a Minotaur I system built by Northrop Grumman.

“NROL-111 is the 16th payload we put on orbit in 18 months to advance our mission of providing critical information to [IC, government agencies, military and other users,]” said Scolese.

Executive Mosaic commends Christopher Scolese and the NRO team for winning his third Wash100 Award. Scolese’s space sector contribution and federal landscape leadership position him as a significant executive in the GovCon industry throughout the year.