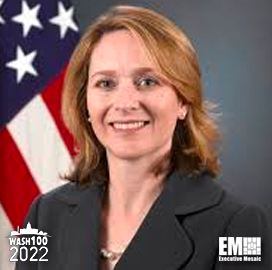 Executive Mosaic is pleased to announce Kathleen Hicks, deputy secretary at the Department of Defense, as an inductee into the 2022 Wash100 — an annual list of public and private sector leaders who are at the forefront of trends and events that shape government contracting activity. This marks the second consecutive year that Hicks has been selected to receive the most coveted award in GovCon.

Hicks received Senate confirmation to the DOD’s second-highest civilian post in February 2021 and returned to the Pentagon from her prior executive roles at the Center for Strategic and International Studies, a national security think tank in Washington, D.C. Cast a vote for the deputy defense secretary as one of your favorite influential leaders on Wash100.com.

In 2021, the first female deputy defense secretary has led the department’s efforts to pursue artificial intelligence-based technology platforms and harness data as a strategic asset to bolster U.S. warfighting capabilities as part of the Joint All Domain Command and Control strategy.

One month after she was sworn in, Hicks directed the formation of an Innovation Steering Group to advise the DOD leadership team on science, technology and tech transition matters that help inform their decision-making process.

She outlined in a May 5 memorandum four data decrees that seek to help DOD transform itself into a data-centric organization and create decision advantage at all of its components.

“Data is essential to preserving military advantage, supporting our people, and serving the public. Leaders at all levels have a responsibility to manage, understand and responsibly share and protect data in support of our shared mission,” Hicks wrote in the memo for senior Pentagon leaders, combatant command chiefs and defense agency heads.

In June, she launched the DOD AI and Data Acceleration initiative with the goal of advancing data and AI concepts, including JADC2, to help combatant commands explore foundational capabilities in a series of exercises and experiments.

“Through successive experiments, we seek to understand the obstacles and challenges that impair our current ability to rapidly scale AI across the department and the Joint Force,” Hicks said in June.

She went on a trip to New England during the month of July to assess the status of DOD programs in the region including the USS Daniel Inouye destroyer ship at General Dynamics’ Bath Iron Works facility, the Boeing-built KC-46A Pegasus tanker at Pease Air National Guard and the Massachusetts Institute of Technology’s Artificial Intelligence Accelerator partnership with the Air Force.

In a September video news teleconference, Hicks said DOD increase spending in small business research and development programs by 83 percent over the past decade and is committed to making it easier for small businesses to enter the defense marketplace.

The deputy defense secretary gave a speech at Wayne State University in November to overview DOD’s Climate Adaptation Plan and Climate Risk Analysis framework developed to serve as guide for department personnel to understand and mitigate the operational impacts of climatic changes.

“As a nation and a department, we must do our part to mitigate climate change itself.  The president has set an aggressive goal for the U.S. to reach net-zero greenhouse gas emissions by 2050,” Hicks said.

In December, the Pentagon’s second-highest-ranking civilian directed the appointment of a chief digital and AI officer to oversee artificial intelligence, data and digital initiatives as part of an organizational change aimed to advance the JADC2 concept.

Executive Mosaic congratulates Kathleen Hicks and the DOD organization for their selection to receive the 2022 Wash100 Award.