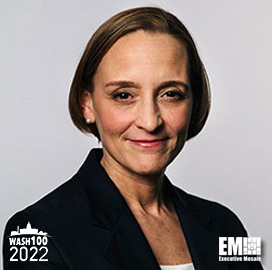 Executive Mosaic is pleased to announce Amy Gilliland, president of General Dynamics Information Technology, as a 2022 Wash100 Award recipient. She has been selected five consecutive times to the annual list of executives with staying power and influence in the government contracting arena.

Executive Mosaic CEO Jim Garrettson noted Gilliland’s induction into the Wash100 last year as a recognition of her ability to maintain the stability and growth at one of GovCon’s business titans. Cast a vote for Gilliland as one of your favorite GovCon industry leaders on Wash100.com.

The GDIT business holds a backlog of $8.7 billion as of year-end 2021, up 4 percent from the prior year, General Dynamics CEO and 2022 Wash100 awardee Phebe Novakovic told investors on an earnings call.

Most recently, GDIT was selected to provide a full suite of user-facing and data center services to the National Geospatial-Intelligence Agency under a 10-year, $4.5 billion contract that encompasses support for intelligence community cloud and desktop environments.

The company also holds a position on the State Department’s $3.3 billion Global Support Strategy 2.0 contract vehicle for enterprise IT services to support visa application and issuance work at U.S. embassies and consulates.

Aside from providing services to the intelligence and civilian agencies, GDIT also works to carry out IT modernization projects for the U.S. military. The business assists U.S. Army Europe in managing IT mission command systems and networks under a five-year, $695 million task order and helps the U.S. Navy consolidate IT help desks as part of a $136.5 million contract. The Defense Intelligence Agency awarded GDIT an $829.2 million task order to perform help desk services at Joint Base Anacostia-Bolling in Washington, D.C. and other DIA facilities.

Gilliland told ExecutiveBiz in a November interview that General Dynamics’ operational agility and the Biden administration’s renewed focus on cybersecurity and cloud programs drove significant growth for the company in the third quarter of 2021. The nearly two-decade industry veteran said the company applies emerging technology and its decades of experience in efforts to help federal customers address IT challenges.

“A lot of people look at our company as this nine billion dollar behemoth, but our operations are built on agility and our people have done a beautiful job reacting to and supporting our customers through the emerging requirements and many of the challenges that we didn’t anticipate this year,” Gilliland noted in the interview.

She said at GDIT’s Emerge 2021 Technology Series that her organization provided cloud, application development and network services to federal clients as they shifted to remote environments when onsite work was limited due to pandemic lockdown restrictions.

Also in November, the U.S. Patent and Trademark Office chose the Falls Church, Virginia-based contractor to migrate agency IT infrastructure to the cloud. Under a $190 million contract, the company will aim to provide USPTO a hybrid computing platform to give agency users access to cloud services from Amazon Web Services, Microsoft and Google

GDIT subsequently announced then it would open two new facilities in Texas and New Orleans for its technology shared services teams to provide IT support to more than 135 government programs.

In a Nov. 23 LinkedIn post, Gilliland introduced General Dynamics’ mental health awareness campaign “How Are You, Really?” as part of efforts to help its workforce manage pandemic-related stress and urged other companies to invest in the mental wellbeing of their employees.

“While these conversations and work alternatives can be a huge culture shift for companies, imagine our resiliency as a nation if we used our collective platforms and technologies to proactively tackle mental health issues,” she wrote.

Executive Mosaic congratulates Amy Gilliland and the General Dynamics IT organization for their selection to receive a 2022 Wash100 Award.