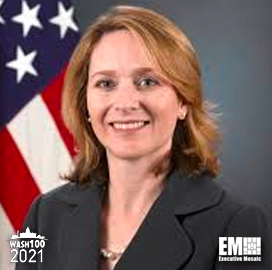 Executive Mosaic is honored to present Kathleen Hicks, deputy secretary of defense, as a 2021 Wash100 Award recipient for her data prioritization efforts and policy advancements, which will ready the federal defense sector for the future of warfare.

This marks Hicks’ first Wash100 Award. Hicks, a former Department of Defense (DOD) official, was confirmed as deputy defense secretary through a Senate voice vote in Feb. 2021. Prior to her nomination, she oversaw an international security program at the Center for Strategic and International Studies. Hicks is a member of the U.S. Naval Institute’s board of directors and The Aerospace Corp.’s board of trustees.

Hicks said during a Senate Armed Services Committee hearing on her nomination that she would support nuclear modernization programs, weapons acquisition budgeting and national security efforts. She also seeks to promote the “defend forward” cybersecurity approach, where cyber operators breach foreign adversary networks to understand their position and get early warnings on potential attacks on U.S. networks.

“I am supportive of the approach,” Hicks said, but added that she needs to examine “exactly how the authorities are being executed,” giving her some wiggle room to adjust her broad support in specific areas.

During her hearing, she said that she will drive the DoD’s data prioritization, adding that she would lead by using data to inform business decisions. “As we move into an era of data, the department needs to move there too,” she told the Senate Armed Services Committee.

Hicks will leverage data to support business and budgetary decisions, as well as military operations. She stated that the warfighters should move to new “operational concepts,” such as the Joint All Domain Command and Control (JADC2), where battlefield networks are linked across domains.

She will also modernize warfighting systems to be more data-centric in new operating concepts. As deputy secretary, Hicks will supervise the Pentagon technology modernization and reform initiatives. Following her appointment, Hicks reported that she is directing the Pentagon to reassess the Trump administration’s budget proposal for fiscal year 2022.

Hicks is calling on the DOD’s director of Cost Assessment and Program Evaluation (CAPE) to study line items in the FY 2022 budget including U.S. Navy shipbuilding efforts and aircraft modernization programs. Other items up for assessment include long-range fires and nuclear weapons.

There were also items in the blueprint such as autonomy, force dispersal and small surface combatant fleet expansion that caught her interest, she noted. “I think the biggest challenge that I will face, if confirmed, because of this is around budget transparency,” said Hicks.

CAPE’s assessment will revolve around the identified programs’ potential involvement in deterrence efforts in the Pacific region, as well as the acceleration of autonomous systems development and the transition away from legacy systems. The group will also evaluate potential funding for the Biden administration’s climate programs and other Build Back Better initiatives for FY 2023 through 2027.

According to a memo from Hicks, the Biden team “will focus on a very small number of issues with direct impact on FY 2022” in the few weeks it has to impact the next budget, which is expected to be released in early May.

The programs will be judged against three main criteria: if the investments deter aggression in the Pacific; whether there are options for accelerating the development of autonomous systems; and what near-term options exist for getting rid of older systems.

“I will strive to move beyond simplistic approaches to reform and instead focus on targeted reform efforts with definable metrics and supported by rigorous analysis,” Hicks responded to advance policy questions from the Senate Armed Services Committee.

Do you have two minutes to vote for your favorite executives in the GovCon sector?

Visit Wash100.com to cast a vote for your ten favorite executives across the government, federal and GovCon sectors. Each vote is an act of support for the executives in the GovCon space that deserve to be recognized for their leadership, reliability, innovation thinking, vision and success for their companies and the collective goal to drive the GovCon sector forward together.

Cast your TEN votes now before April 30th to ensure your votes are counted in time.

Executive Mosaic congratulates Kathleen Hicks and the Department of Defense on her first Wash100 Award. Since her appointment in Feb. 2021, Hicks has already shown her dedication to federal modernization efforts to support warfighters in the future battlefield. Her efforts will continue to influence the government contracting (GovCon) sector throughout 2021 and beyond.