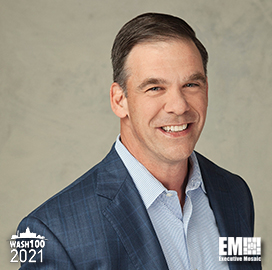 Executive Mosaic is honored to present Robert Silverman, executive vice president with Booz Allen Hamilton, as a 2021 Wash100 Award recipient for spearheading new defense technology to support U.S. warfighters in the digital battlefield, as well as his efforts to promote allyship across the company and industry.

This marks Silverman’s first Wash100 Award. He has an analytics background and significant experience using “productive disruption” to help clients achieve success. Currently, Silverman is focused on supporting defense clients, leveraging innovative technologies to protect the nation, both at home and abroad.

Silverman has made major technology and culture contributions to both the company and the government contracting (GovCon) sector throughout the year. Notably, Silverman has helped to transform warfare with data and technology solutions.

The National Defense Strategy has called for a more innovative, resilient military to maintain the U.S. competitive advantage. Joint All-Domain Command and Control (JADC2) envisions a force that is interconnected and information advantaged.

Silverman has driven emerging technologies, open-source architecture, agile practices and modern procurement methods to support the nation’s armed forces and their partners, as they work to meet critical missions with flexibility and cost-effectiveness.

An integrated digital battlespace would enable the military to drive information to the edge for faster decisions; utilize mobile networks to enable independent, yet coordinated operations; deliver data to the warfighter, giving superior knowledge of force locations; and safeguard military intelligence with advanced cybersecurity.

Booz Allen Hamilton has made massive strides to advance technology for the federal government. In Dec. 2020 Frost & Sullivan identified Booz Allen Hamilton as the largest single market shareholder in the American managed and professional security services sector for the third year in a row.

The report, titled “Managed and Professional Security Services Market in the Americas, Forecast to 2024”, states that Booz Allen’s role as an established U.S. defense and federal contractor enabled it to reach its current market share of 10.7 percent.

Frost & Sullivan also cited the company’s capacity for providing and scaling cybersecurity as well as intelligence-focused technologies for large organizations as a key contributor to its market position.

In addition to his efforts to advance defense solutions to prepare the U.S. military force for the future battlefield, Silverman has been an active ally and has championed inclusion, diversity and multiculturalism in the workforce.

During an interview in summer 2020, Silverman discussed his passion for supporting others. He has worked to increase representation of racial and ethnic minority talent through Booz Allen Hamilton’s Multicultural Business Resource Group (BRG), as well as the emphasis he places on allyship.

“To me, allyship is a Booz Allen way of being. We want to solve the world’s most difficult problems for a very diverse constituency of clients. We can’t do that if we’re approaching those problems from a singular mindset. We need a diversity of perspectives, ideas, and voices. It’s my role to help create a culture that champions people who look and think differently than me,” Silverman said.

Before April 30th, Executive Mosaic is asking you to make a significant contribution to our GovCon community by voting for your favorite executives who drive the industry forward in the 2021 Wash100 Vote Standings. Visit Wash100.com to learn more about the race to the finish line and who could use your vote the most to be celebrated for their contributions to our industry.

Cast your TEN votes before the April 30th deadline to voice your support for our community.

Executive Mosaic congratulates Robert Silverman and Booz Allen Hamilton for his first Wash100 Award. Silverman’s efforts to drive new defense technology, as well as promote allyship within the GovCon sector will continue to positively impact the market and public-private relations.