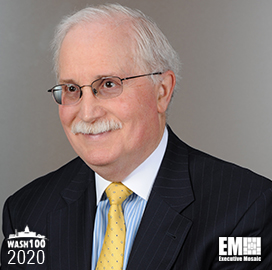 Barry Barlow, Perspecta SVP and Chief of Staff, Named to 2020 Wash100 for Securing Valuable Contract Awards and Expanding the Company

Executive Mosaic is honored to present Barry Barlow, senior vice president and chief of staff at Perspecta, as an inductee into the 2020 Wash100 Award for strategic growth of the company and his contributing to securing valuable contract awards.

This marks Barlow’s first Wash100 Award. He assumed his current positions in June 2018 and helps drive  innovation strategy and growth for the company’s solutions, especially in technology.

Barlow is also responsible for Perspecta’s long-term technology strategy, vision and he advocates for that vision for customers. His skills in customer technology outreach initiatives provide a distinct advantage in the selection, implementation and integration of strategic partners for Perspecta.

Under the contract, the company will continue to provide cyberspace science, research, engineering and technology integration services to the program. Perspecta will provide NIWC Pacific with operational exercise design and construction, operations and requirements analysis, concept formulation and development, feasibility demonstrations and operational and technical support services.

“When you combine decades of experience on Navy programs and systems with a deep rooted heritage of advanced engineering capabilities and add an unmatched portfolio of innovative cyber solutions, you get Perspecta,” said Perspecta.

Perspecta has additionally received a potential $656.9 million contract modification to continue to offer information technology support services to the U.S. Navy under the service’s Next Generation Enterprise Network program in Sept. 2019.

The modification extends the NGEN contract’s sixth option year ordering period by another four to seven months, which will run between June 2020 and September 2020 or December 2020. Contract work will take place across the U.S., Japan, Guam, Korea and Europe.

Not only has Barlow been recognized for his strong leadership and strategic efforts with Perspecta throughout 2019, but he has also been recognized for his tenure as chairman with the company. In May 2019, Jim Garrettson, founder and CEO of Executive Mosaic, presented Barry Barlow, chief of staff and senior vice president of Perspecta, with the Chairman’s Award for completing his second year as chairman of the CTO Group for Executive Mosaic’s 4×24 program.

The award has marled the second consecutive year Executive Mosaic has awarded Barry Barlow the Chairman’s Award. With more than 40 years of government, commercial and academic experience, Barlow has a range of expertise in the defense and space industry. Prior to joining Perspecta, Barlow served as the senior vice president and chief technology officer for Vencore between Feb. 2013 and May 2018.

He served as the first director of online GEOINT Services at the National Geospatial-Intelligence Agency (NGA), delivering online, on-demand GEOINT services and advancing the end-to-end user experience. Barlow was selected as the director and deputy director of acquisition at NGA, as well as NGA’s chief architect and chief engineer.

While Wash100 is the most coveted award in the GovCon industry, Barlow has been continuously recognized throughout his career for his leadership in the sector. During his federal career, Barlow has been honored with multiple awards.

Executive Mosaic congratulates Perspecta and Barry Barlow for his 2020 Wash100 Award. Barlow’s continued dedication to develop the company’s expansion, contract awards and influence in the industry proves that he is a notable figure in the GovCon sector.