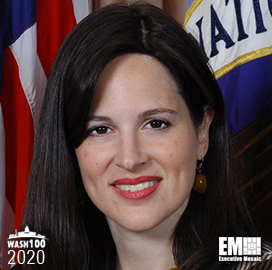 Executive Mosaic is pleased to present Anne Neuberger, director of National Security Agency, as an inductee into the 2020 Wash100 Award for her role in developing new counter threat policies with the agency and driving federal technology initiatives.

In her role, Neuberger supervises efforts to prevent and counter cyber threats to the defense industrial base and national security systems. Neuberger previously served as deputy director of operations and head of NSA's Russia small group.

Before her appointment as director, Neuberger planned for the agency's first 60 days, stating that it would rely on a joint, collaborative approach, in Sept. 2019. Her diverse team will consist of professionals from across different areas such as emerging technologies, threat intelligence and nuclear command and control, she said.

Neuberger said she intends to organize her team as a unified community with diversity as a strength. The directorate will work with the FBI and the Department of Homeland Security to operationalize threat intelligence for network defense.

NSA’s lessons learned over the past years will also inform the new directorate’s security standards and efforts to educate industry, she noted.

Since her October appointment, Neuberger has helped the agency develop proactive cybersecurity initiatives that will enable NSA to better combat threats as technology continues to grow. Most notably, Neuberger announced a new cloud security framework in Dec. 2019.

“We'll be coming out with an unclassified advisory on the techniques used to compromise clouds and some mitigation advice,“ she said.

The NSA published the draft at the beginning of 2020. The guidance includes an information sheet with a structure on mitigating cloud vulnerabilities. NSA identifies cloud security components and discusses threat actors, cloud vulnerabilities and potential mitigation measures.

The Cybersecurity and Infrastructure Security Agency have encouraged administrators and users to review NSA's guidance on Mitigating Cloud Vulnerabilities and CISA's page on APTs Targeting IT Service Provider Customers and Analysis Report on Microsoft Office 365 and other Cloud Security Observations for information on implementing a defense-in-depth strategy to protect infrastructure assets.

In addition to Neuberger's new initiatives, she has also served as a public source for potential cyber attacks that would affect the nation. In Sept. 2019, Neuberger spoke about the upcoming elections' vulnerability to ransomware attacks.

The directorate will focus efforts on ransomware in general, Neuberger said. Ransomware blocks users from computer access via encryption until a certain amount of money is paid. Recent cases of ransomware have been occurring in cities across the country. Neuberger also talked about the directorate's efforts to protect the nation from cyber threats led by adversaries such as China, Russia, North Korea and Iran.

Executive Mosaic congratulates NSA and Anne Neuberger on her 2020 Wash100 Award. Neuberger's proactive counter threat guidelines and technology initiatives proves that she is a notable figure in the GovCon industry and a leader in the ever-expanding tech industry.

This year represents our sixth annual Wash100 Award selection. The Wash100 is the premier group of private and public sector leaders selected by Executive Mosaic's organizational and editorial leadership as the most influential leaders in the GovCon sector. These leaders demonstrate skills in leadership, innovation, achievement, and vision.