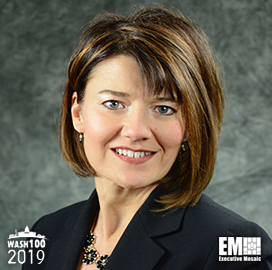 Executive Mosaic is happy to announce that Tina Dolph, president and CEO of Siemens Government Technologies, has been selected to the 2019 edition of the Wash100 — Executive Mosaic’s annual selection of the most influential voices in the government contracting arena — for her 20 years of leadership experience in government and her efforts modernizing energy systems for a number of military facilities.

This marks her first Wash100 award.

At the end of September, Tina Dolph was named the president and CEO of Siemens Government Technologies’ U.S. Federal Arm, taking over from Barbara Humpton, fellow 2019 Wash100 winner, who became CEO for Siemens’ entire U.S. operations in June. Dolph officially assumed the role for the company on Oct. 1st.

In December, Siemens’ U.S. Federal Arm was selected to support the modernization of a steam plant at Los Alamos National Laboratory as part of a potential 21-year, $555M contract from the Department of Energy. Dolph said the objective will be addressing energy efficiency issues, resiliency and carbon dioxide reduction goals. In addition, updating a gas turbine, installing new generators, boilers and a high-pressure gas line is also on the docket to modernize the lab.

Tina Dolph has held a wide-range of leadership roles during her over decades in the government industry. Prior to her position with Siemens Government Technologies, she served as the chief strategy officer for CRDF Global. She has also served as the executive vice president and general manager of FCi Federal and as president of Information and Technical Solutions for ASRC Federal and spent over 18 years with Lockheed Martin in various roles.

Dolph was instrumental to the integration and merger of Lockheed Martin and PAE in 2011. She served in a number of executive leadership positions, including executive vice president of PAE Operations and COO.