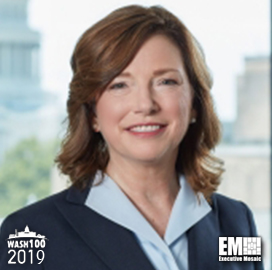 Barbara Humpton, President & CEO of Siemens USA, Added to 2019 Wash100 for Her Leadership and Continued Role in Siemens’ Success

Executive Mosaic is happy to announce that Barbara Humpton, president and CEO of Siemens USA, has been selected to the 2019 edition of the Wash100 “” Executive Mosaic's annual selection of the most influential voices in the government contracting arena “” for her leadership and role in the overwhelming success of all Siemens' assets in the U.S. This marks her fifth Wash100 win.

In April 2018, the Siemens Corporation announced that Barbara Humpton had been promoted to CEO of the company's U.S. operations. She was the chief executive officer for Siemens Government Technologies before Tina Dolph, fellow 2019 Wash100 winner, took over the role. Humpton began her new position on June 1st.

Prior to her promotion, Humpton assisted Siemens in receiving a $2.36M contract to help the Eastern Band of Cherokee Indians install, operate and maintain a 2,000-photovoltaic solar panel array near Murphy, N.C. in March. Humpton expressed her excitement to partner with EBCI and meet their goal of supplying renewable power to four buildings with more than 155,000 square feet of space. Those buildings are expected to be operational by March 2019.

Siemens USA showcased its cloud-based offerings that connect city data to leverage infrastructure during the four-day 2018 Infrastructure Week. The company presented its City Performance Tool as part of its collaborative effort with Los Angeles to meet its sustainability goals through the changes in infrastructure.

“Our digital capabilities bring data to life and help cities unlock their potential when it comes to infrastructure investment,“ said Humpton during the panel discussion on the first day of the event.

Before joining Siemens in 2011, Humpton served as a vice president at Booz Allen Hamilton and was responsible for program performance and business development for technology consulting in the Department of Justice and Department of Homeland Security.

For a time, Humpton was a vice president at Lockheed Martin managing biometric programs, border and transportation security and critical infrastructure protection. Some of the most critical programs she oversaw was the FBI's Next Generation Identification and TSA's TransportationWorkers' Identification Credential.

Humpton is also on the board of directors of MorganFranklin, the American Heart Association Greater Washington Region, the Center for Strategic and Budgetary assessments and the George Washington University Law School Government Contracts Advisory Board.

As the CEO of Siemens USA, she guides the company's strategy and engagement with 50,000 employees and more than $23B in revenues and $5B in annual exports.

Executive Mosaic congratulates Barbara Humpton and the Siemens Corporation for receiving this award.

This year represents our sixth annual Wash100 award selection. The Wash100 is the premier group of private and public sector leaders selected by Executive Mosaic's organizational and editorial leadership as the most influential leaders in the GovCon sector. These leaders demonstrate skills in leadership, innovation, achievement, and vision.