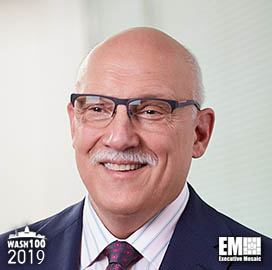 Executive Mosaic is pleased to introduce Peraton CEO Stu Shea as an inductee into the 2019 Wash100 “” Executive Mosaic“™s annual selection of the most influential voices in the government contracting arena “” for his efforts to accelerate growth and provide exemplary customer service. This marks the third Wash100 award for Shea.

Shea has been leading Peraton since June 2017 following his tenure as president and chief operating officer of Leidos. Before that, he spent eight years in several leadership positions at SAIC and served on the advisory boards of various tech and research entities.

Under his leadership, the company received several contract awards in 2018. One of the biggest was NASA awarding Peraton a one-year, $243 million contract extension to continue supporting the agency’s Space Communications Network Services. Peraton will continue supporting the Goddard Space Flight Center’s largest services program with mission integration planning and engineering support for near Earth and space communications connectivity including telemetry, tracking and command.

In a December 2017 interview with ExecutiveBiz, Shea said the company is working to collaborate and consolidate operations as a team, given that the firm was formed out of fragments of other companies. He added that Peraton, which previously had challenges in integration, now works as a unit with a mission to “protect and promote freedom around the world.“

Shea said that one of his goals for the company is to foster growth and reinforce its strength in its key technological focus areas.

“We have an organization that has a lot of history“¦but we are really focused on the future. We are out running hard with all these tools we have just built ““ the name, the values, the leadership, the vision. We are a force to be reckoned with and our competition should know that,“ Shea said.

Executive Mosaic congratulates Stu Shea and the Peraton team for their selection to receive this award.