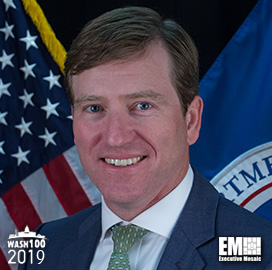 Director of the U.S. Cybersecurity and Infrastructure Security Agency

Executive Mosaic is pleased to announce that Christopher Krebs, director of the Department of Homeland Security“™s Cybersecurity and Infrastructure Security Agency, will be inducted into the 2019 Wash100 “” Executive Mosaic“™s annual selection of the most influential voices in the government contracting arena “” for serving as the agency“™s first director and helping to protect the nation“™s cyber infrastructure.

President Donald Trump signed CISA into law on November 16, 2018, restructuring the DHS National Protection and Programs Directorate into a new organization focused on protecting physical and cyber infrastructure. The agency“™s mission calls for coordinating the nation“™s cyber defense while working with other government agencies and the private sector to combat future risks.

Krebs spoke on risk management at a U.S. Chamber of Commerce conference in November 2018.  The agency is similar to a “14-year“ start-up, Krebs said, and contains a variety of organizational processes that need to mature, according to MeriTalk.

He discussed the agency“™s roadmap, CISA 2020, which seeks to develop the agency“™s operational capabilities over the next year. Krebs sought to provide a distinction between CISA and the intelligence community, pledging that “first and foremost“ the agency will be transparent.

CISA 2020 is composed of 12 categories including IT, management functions and budget, that will be reorganized during the transition into a new agency, FCW reported in December 2018.

Previously, Krebs was undersecretary for the DHS National Protection and Programs Directorate and was nominated to that post in February 2018. He also served as the assistant secretary for infrastructure protection, having joined the DHS in 2017.

While working for Microsoft, Krebs was an integral part of the company“™s government affairs team as director for cybersecurity policy. He had a previous stint with the DHS as senior advisor to the assistant secretary for infrastructure protection, helping to form numerous domestic and global risk management programs.

Executive Mosaic congratulates Christopher Krebs and his staff for receiving this award.