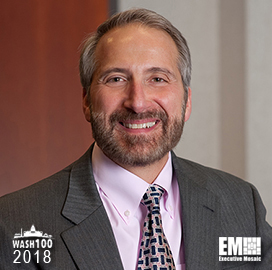 Jason Providakes, President and CEO of MITRE Corp., Inducted Into 2018 Wash100 for His Achievement in Federal Digital Transformation Executive Mosaic is pleased to announce that Jason Providakes, President and CEO of the MITRE Corporation, has been selected to the 2018 edition of the Wash100 — Executive Mosaic’s annual selection of the most influential voices in the government contracting arena — for his leadership in modernizing federal infrastructure.

A driving force in systems engineering and applied sciences, Dr. Providakes has worked for several federally-funded research and development centers, beginning with the National Security Engineering Council. He joined the non-profit MITRE Corp. in 1991 as a lead scientist and went on to hold senior leadership positions there including: chief engineer of the Washington Command, Control and Communications Center; executive director of the U.S. Army Systems & Technology Division, where he spearheaded battlefield digitization; and senior vice president and general manager for the Center for Connected Government.

“I am honored to lead MITRE in the next phase of its proud history of service to America, and I am committed to advancing our international reputation for technical excellence and innovation,” Dr. Providakes said following his appointment. “Public-sector challenges are dynamic and complex, and our cross-domain approach and enterprise-wide systems thinking to collaboration between government, industry and academia have never been more critical than they are today.” In the press release, predecessor Al Grasso commented, “I know that Jason is the right CEO for MITRE at this moment in our history. He was selected with unanimous support of the board, informed by our highest ambitions.”

Dr. Providakes was a member of the Army Science Board and has led and participated in several National Academy of Science studies that investigated complex systems.

Executive Mosaic congratulates Jason Providakes and MITRE Corp. for their selection to receive this award.