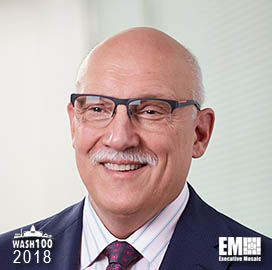 Executive Mosaic is pleased to announce Stu Shea, CEO of the recently-formed Peraton, has been selected as an inductee into the 2018 edition of the Wash100 — Executive Mosaic’s annual selection of the most influential voices in the government contracting arena–for leading by example, providing his tenured technical and operations skill set to effectively support clients’ mission requirements in the Federal business community.

Shea, previously the president and chief operating officer at Leidos, has spent more than 30 years in leadership roles at various companies capitalizing on some of the more trending niches in the federal government: cyber, space, communications security, R&D, critical infrastructure.

“We do not take lightly the responsibility we have assumed in supporting our national security. Our armed forces–soldiers, sailors, airmen and marines–have the courage to show up, to leave their families for something bigger than themselves,” he said on the company page. “What they do is critical to the defense of our nation, the safety of our families, and the preservation of our very way of life. It is a privilege and honor to support them to advance the missions of the institutions that guarantee our freedom and we must ensure that we always provide them with trusted solutions.”

With vision and guiding principles lighting the way, Shea has a commendable track record that certainly lands him on the Wash100. In an exclusive interview with ExecutiveBiz last year, Shea spoke about the then newly-formed company Peraton and how the name change from Harris IT affects the business strategy.

“We’re very thoughtful about things like our mission, our vision, our values and reflect that in our name and what our go-forward position is as a company. We’ve established a mission ‘to protect and promote freedom around the world,'” said Shea. “I think that is a mission statement that people can wrap their heads around, they can participate, it’s emotional for them–it’s something that invokes a sense of pride.”

“I think what we need to do is focus on making sure that people understand where we serve: space, intelligence, cyber/SIGINT, homeland security, defense and communications. Each of those are areas where historically we’ve been involved,” he said calmly. “I don’t see [Peraton] walking away from any market in the future, nor do I see us hitting an inflection point going in a different direction because we’re involved in solid markets of growth, the places where we have real capabilities. The real question is if we can double down and put more energy behind them.”

Executive Mosaic congratulates Stu Shea and the Peraton team for receiving this award.