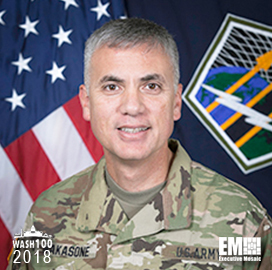 Executive Mosaic is honored to announce that Lieutenant General Paul Nakasone, Commanding General of Army Cyber Command for the United States Army (ARCYBER) has been added into the 2018 edition of the Wash100 — Executive Mosaic’s annual selection of the most influential voices in the government contracting arena–for his contributions to military initiatives and mission force leadership in the cyber arena.

Military cyber professionals, according to Nakasone, are the best at what they do. “Our best [coders] are 50 to 100 times better than their peers,” he said at the International Conference on Cyber Conflict (CyberCon) late last year. The U.S. Army approved a pilot program to recruit experienced cyber security experts directly into the service as cyber officers in December, aiming to bring its first line of officers to the training grounds by February, Nakasone said.

“We want to go after some of the most technical and adept talent out there that would like to serve our nation. What we are looking for is someone who has experience, who has operated within cyberspace, who has the drive and the dedication, and has the inclination that they want to serve the nation,” Nakasone said in a comment.

Now more than ever, our nation’s military needs individuals who can drive forward–and drive faster than their headlights–like Lt. Gen. Nakasone, particularly in the cyber domain. The Army has grown its cyber force by almost nine-fold since last year, with more than 8,000 uniformed cyber soldiers fighting the unseen fight behind the screens.

“It’s very interesting to command an organization where the true talent and brainpower is certainly not at the top, but is at the beginning stages,” Nakasone said to reporters. “It’s the lieutenants. It’s the sergeants. It’s the young captains.”

Electronic warfare is changing the way our military views autonomous systems. Technology has the capacity to replace human work, but human intelligence is needed to perceive the problems that computers and artificial intelligence cannot, which is where the lieutenants, sergeants and young captains will be operating.

Executive Mosaic congratulates Lt. Gen. Paul Nakasone and the U.S. Army Cyber Command for being selected to receive this award.