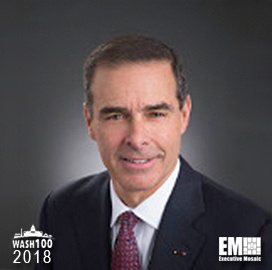 DynCorp CEO George Krivo Inducted to 2018 Wash100 for His Leadership in Providing Support Services to the U.S. Military Executive Mosaic is honored to introduce George Krivo, CEO of DynCorp International, as an inductee into the 2018 edition of the Wash100 — Executive Mosaic’s annual selection of influential leaders in the government contracting arena — for his leadership in providing support to the U.S. military.

Krivo was promoted to his current role in July 2017 after serving as chief operating officer of the McLean, Va.-based company.

DynCorp won a potential six-year, $795.3 million contract from the U.S. Army in May 2017 to provide logistics services for fixed-wing aircraft fleets that carry out transport missions. Krivo says the contract award is a testament to DynCorp’s experience with Army aviation.

“This win validates DI’s reputation as the recognized worldwide leader in supporting U.S. Army aviation,” said Krivo. “We have a rich history of supporting this mission and we are glad to have the opportunity to provide outstanding support to this important program once again.”

“It’s because we’re really about people. In order to get the best out of all of us — for all of us to be our best — we have to lead and be led,” Krivo said. “What it really comes down to is doing the right thing, always, and delivering the results that both our customers expect, and our ethics demand.”

As a U.S. Army veteran, Krivo has over two decades of service in command and staff positions, with strong missile defense experience and regional expertise in Northeast Asia, Europe, and the Middle East. He sits on the board of directors for the Tragedy Assistance Program for Survivors, which provides grief-counseling for the families of fallen soldiers. Before working at DynCorp, Krivo held executive positions with SAIC and DRS Technologies, as well as serving as a managing director for Cerberus Capital Management.