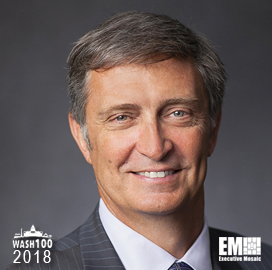 Executive Mosaic is honored to announce Mark Gray, president and CEO of ASRC Federal, as an inductee into the 2018 edition of the Wash100 — Executive Mosaic’s annual selection of influential leaders in the government contracting arena — for demonstrating excellence in negotiating multi-million dollar contracts and overseeing the company’s missions services business.

“The training and research conducted at Plum Island are vital to protecting our country’s livestock,” Gray said. “For more than a decade we have had the privilege of supporting the DHS mission at Plum Island, and our team looks forward to continuing a successful partnership,” he noted.

In March of last year, the company’s mission services business received a potential five-year, $250 million contract to provide a range of information management services to the Environmental Protection Agency.

“The partnership between ASRC Federal’s companies and the EPA dates back to 2000,” said Gray. “We are proud to have earned numerous opportunities over the past 16 years to partner with the EPA and support its important national mission,” the four-time Wash100 inductee added.

Prior to joining the company in 2014, Gray previously worked at URS Corp. as vice president and general manager of the firm’s systems engineering and information solutions group. He is the former chief operating officer of INDUS Corp. and served as a senior VP at Anteon Corp. He also held program management, test and systems engineering roles at the Naval Air Systems Command, responsible for several weapons development initiatives. Gray is a member of the Professional Services Council’s board of directors.

Executive Mosaic congratulates Mark Gray and the ASRC Federal team for their selection to receive this award.