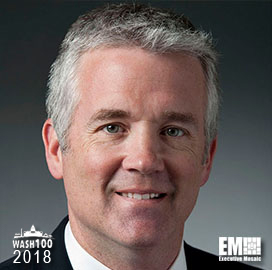 Executive Mosaic is pleased to announce Andy Green, executive vice president and president of technical solutions division at Huntington Ingalls Industries, as an inductee into the 2018 edition of the Wash100 — Executive Mosaic’s annual selection of influential leaders in the government contracting arena–for his valuable insights into providing technical solutions and logistics support to the government and United States military.

He was elected in December 2017 to the Professional Services Council’s board of directors to serve a three-year term on the trade group’s board that took effect Jan. 1.

In March of last year, HII named eight new executives to its technical solutions division that was formed in December 2016 after the shipbuilding company completed its acquisition of Huntsville, Alabama-based government services contractor Camber Corp.

“We have a very strong team in place, and I look forward to working with them to continue our strong performance on existing contracts and to pursue new business opportunities to grow the division,” Green said.

“This award is the result of the first true collaborative effort of HII’s Integrated Mission Solutions team and our Fleet Support team,” Green said of the Navy contract.

“The synergy of both groups’ capabilities is an example of why HII acquired Camber to join its Technical Solutions division.”

In December 2017, a joint venture of technical solutions’ SN3 (a Huntington Ingalls subsidiary) and BWX Technologies landed a potential 10-year, $1.39 billion contract from the Energy Department’s National Nuclear Security Administration to clean up contaminants at the Los Alamos National Laboratory.

Months prior to that, HII announced that a joint venture of SN3, Honeywell and Jacobs Engineering Group received the green light from the Energy Department’s NNSA to manage and operate the Nevada National Security Site.

The Navy veteran joined HII in 2011 as corporate VP of investor relations and prior to that, held leadership roles at Celanese, Wells Fargo and Eaton.

Executive Mosaic congratulates Andy Green and his Technical Solutions team at Huntington Ingalls Industries for their selection to receive this award.