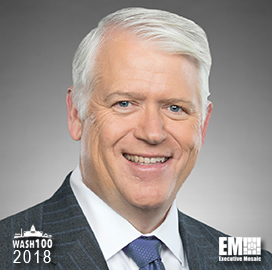 Executive Mosaic is pleased to introduce Rick Ambrose, executive vice president of Lockheed Martin’s space systems segment, as an inductee into the 2018 edition of the Wash100 — Executive Mosaic’s annual selection of influential leaders in the government contracting arena–for his executive project management of innovations in improving intelligence technology initiatives.

Ambrose has been with Lockheed since 2000 and leads a more than $9 billion business segment with approximately 18,000 employees that provides missile defense, satellite platforms and other technology offerings for government and commercial clients.

In a LinkedIn article published in August, Ambrose cited virtual reality, artificial intelligence and 3D-printing as the top three trends he believes will advance and redefine satellite production and noted that AI systems will eventually serve as virtual assistants to astronauts involved in deep space exploration missions.

“A.I. systems will analyze problems and walk astronauts through how to fix them in real-time, and also assist with scientific research and analysis,” he said.

Earlier this year, Lockheed announced plans to move the Fleet Ballistic Missile program from its space systems business’ facility in California to its other offices in Colorado and Florida over the next eight years.

He said then that the move to reshape the FBM program seeks to help the company centralize skills and take advantage of its manufacturing and engineering facilities in an effort to help the U.S. Navy achieve cost savings on the initiative.

Lockheed also unveiled in June a space-focused curriculum and a new application as part of the Generation Beyond program, which Ambrose said seeks to stimulate students’ interest in science, technology, engineering and math by linking them to the “real-world exhilaration of space exploration.”

2017 also saw the start of construction work on a $350 million satellite manufacturing facility at the company’s Colorado campus and the launch of a new line of satellite buses.

“We now have one family for every mission fully integrated with our end-to-end capabilities in ground stations, payloads and software applications,” he said of the satellite bus product line.

Ambrose is chairman of the board of directors of United Launch Alliance and a recipient of the National Defense Industrial Association’s 2017 Peter B. Teets Award in recognition of his contribution to the space systems sector.

Executive Mosaic congratulates Rick Ambrose and the Lockheed Martin team for their selection to receive the award.