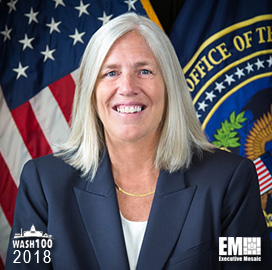 Executive Mosaic is honored to announce Susan Gordon, principal deputy director at the Office of the Director of National Intelligence, as the newest inductee into the 2018 edition of the Wash100 — Executive Mosaic’s annual selection of influential leaders in the government contracting arena — for her experience and expertise in leading initiatives and fostering innovation with industry partners.

Gordon, a 27-year CIA veteran, officially took over as the fifth principal deputy director of ODNI in August 2017 two months after her nomination for the post.

She comes to ODNI as the agency works to introduce changes such as consolidating various ODNI-affiliated organization websites under a common domain, DNI.gov, in an effort to provide organized content to the public.

Prior to ODNI, Gordon worked at the National Geospatial-Intelligence Agency, serving as deputy chief between 2015 and 2017. While at NGA, Gordon helped advance the expansion of GEOINT services to the marketplace and supported diverse workforce recruitment and agile governance efforts.

During her time at NGA, the agency established a team of personnel in Silicon Valley to help facilitate innovation and forge partnerships with industry.

“The idea is to position us to be present with the innovators as they innovate, and have enough of our talent there… so we can discover together the possibilities of the offering and introduce them right into our mission space,” she told Federal News Radio in a May 2016 interview.

She also led efforts to reform NGA’s acquisition system including the launch of a new initiative that seeks to streamline the procurement process through changes in the agency’s decision-making authority and organizational structure.

Those changes covered the acquisition governance structure, portfolio management and the organizational placement of the component acquisition executive.

“The culmination of these governance changes provides a structured and repeatable approach to validating and managing NGA’s acquisition efforts,” Gordon said in an October 2015 open letter to the NGA workforce.

“However, we are mindful that the success of this approach must be a healthy balance between mission flexibility and fiscal and performance accountability,” she added.

Gordon joined the CIA in 1980 as an analyst at the agency’s office of scientific and weapons research and subsequently held leadership roles such as director of the office of advanced analytic tools and chief of the information operations center.

She also spearheaded the creation of the intelligence community’s venture capital arm In-Q-Tel in 1998.

Executive Mosaic congratulates Susan Gordon and the ODNI team for their selection to receive this award.