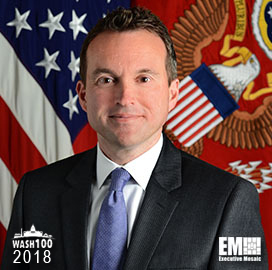 Executive Mosaic is honored to announce Eric Fanning, president and CEO of the Aerospace Industries Association, as an inductee into the 2018 edition of Wash100 – Executive Mosaic’s annual selection of the most influential voices in the government contracting arena – for advancing U.S. national security capabilities and his work in defense acquisition reform.

AIA announced his appointment in September 2017 and Fanning formally assumed the role in January. “The aerospace and defense industry represents more than 2.4 million proud workers, representing over 13 percent of the nation’s manufacturing force from all 50 states, who passionately understand the gravity of their contribution to our economy and national security,” he said in the release. The aerospace industry recorded $872 billion in 2016 sales.

In May 2017, Fanning was named to the board of advisers at the Center for a New American Security. Prior to AIA and CNAS, he served as secretary of the U.S. Army where he cited acquisition reform and efforts to address emerging threats as immediate priorities.

During his tenure, he established a “rapid capability office” to help advance military readiness in electronic and cyber warfare, survivability and position navigation timing, as well as give the service branch a technological edge over potential adversaries.

“The Army Rapid Capabilities Office is a major step forward, allowing us to prioritize cross-domain, integrated capabilities in order to confront emerging threats and advance America’s military dominance,” Fanning said in a statement.

“We’re serious about keeping our edge, so we need to make changes in how we get soldiers the technology they need,” he added

Fanning has held several leadership roles at the Defense Department including: chief of staff for the defense secretary; acting secretary of the U.S. Air Force; and deputy chief management officer of the U.S. Navy.

The 25-year government veteran has also served as associate director of political affairs for the White House, as a staff member on the House Armed Services Committee and as senior vice president for strategic development with Business Executives for National Security.

Executive Mosaic congratulates Eric Fanning and the AIA team for their selection to receive this award.