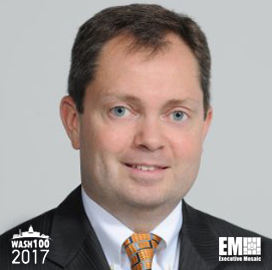 Executive Mosaic is pleased to announce Steve Rubley, CEO of Thomson Reuters Special Services, as an inductee into the 2017 edition of the Wash100 — Executive Mosaic’s annual selection of influential leaders in the government contracting arena.

Rubley concurrently serves as managing director of the government segment at parent company Thomson Reuters’ legal division, where he oversees a portfolio of public sector businesses as well as the implementation of growth strategies and technologies that include the court case management platform C-Track.

At TRSS, Rubley is responsible for the business’ overall strategy such as the development of platforms that seek to leverage software tools and content in support of federal government clients.

In March 2016, TRSS partnered with Terbium Labs to integrate the latter’s Matchlight data intelligence platform with its customized intelligence tools in an effort to help government and corporate clients mitigate data theft cases.

Rubley previously served as vice president and general manager of risk and fraud at Thomson Reuters’ legal division before he assumed his current roles at TRSS in 2012.

He is a former VP at ChoicePoint Government Services, which was acquired by Thomson Reuters in 2008.

Executive Mosaic congratulates Steve Rubley and the Thomson Reuters team for their selection to receive this award.