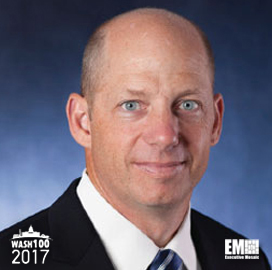 Executive Mosaic is pleased to recognize John Heller, CEO of PAE as an inductee into the 2017 edition of the Wash100 — Executive Mosaic’s annual selection of influential leaders in the government contracting arena.

Two months after the deal’s closure, Heller told ExecutiveBiz during an interview in May 2016 the transaction is evidence of the government services market’s return-on-investment for prospective buyers of contractors.

“They (Platinum Equity) see the contracting segment of the economy as stable and predictable. Even though we felt the defense spending downturn within our industry over the past few years, it has a stable spending graph over the long term,” Heller said then.

“From an investment standpoint, our industry looks very attractive and doesn’t have huge swings upward or downward. If you acquire a good company and help it grow, you can take advantage of that stable market and continue with a successful business.”

The company also offers organizational, intermediate and depot-level maintenance and logistics services for the U.S. Navy‘s F-5F and F-5N aircraft platforms under a contract that took effect in July.

“PAE has also expanded the mission-focus of its aircraft services portfolio, by supporting aircraft maintenance for the training of Navy and Marine Corps aircrews and simulating the capabilities of adversary fighter aircraft operating in today’s theater,” Heller said of that contract.

PAE also provides shipboard services to the Naval Expeditionary Forensics and Biometrics program as part of a $66 million task order it won through the SeaPort-e professional services contract vehicle.