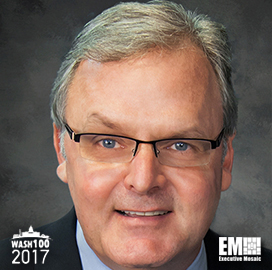 Executive Mosaic is honored to introduce Jim Chilton, president of Boeing‘s network and space systems business, as an inductee into the 2017 edition of the Wash100 — Executive Mosaic’s annual selection of influential leaders in the government contracting arena.

Chilton was promoted to the role of N&SS president in October 2016 after serving as vice president of Boeing’s strategic missiles and defense systems segment.

He started his career with Boeing in 1984 as a turbo machinery development engineer at the Rocketdyne division.

Executive Mosaic congratulates Jim Chilton and the Boeing team for their selection to receive this award.