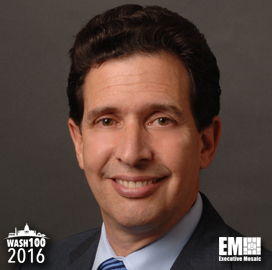 Executive Mosaic is honored to introduce Tom Vecchiolla, president of Raytheon‘s international sales and marketing division, as an inductee into the 2016 edition of the Wash100 — Executive Mosaic’s annual selection of influential leaders in the government contracting arena.

Vecchiolla served as vice president of business development and strategy in Raytheon’s integrated defense systems business segment before his May 2014 appointment to president of the Raytheon International organization.

The initiative in Estonia works to support the country’s bilateral defense cooperation with the U.S., while the investment in Poland aims to fund engineering-focused education and research programs.

His Raytheon career also includes roles such as director of strategy and government relations and director of naval programs within the IDS segment.

He worked as VP of government programs at Commerce One‘s e-government solutions arm before his initial appointment to Raytheon in 2002.

Vecchiolla is also a former legislative staffer for national security and defense on Capitol Hill and served 22 years in the U.S. Navy as a naval aviator.

Executive Mosaic congratulates Tom Vecchiolla and the Raytheon team for their selection to receive this award.