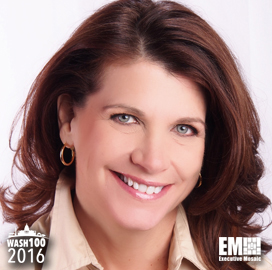 Executive Mosaic is glad to introduce Jill Bruning, an executive vice president at AECOM and general manager of the firm’s intelligence community business unit, as an inductee into the 2016 edition of the Wash100 — Executive Mosaic’s annual selection of influential leaders in the government contracting arena.

Bruning transitioned into the EVP role after AECOM acquired URS in October 2014 and oversees mission support, technical services, intelligence analysis and engineering operations for the company.

Bruning received a gold award in the Female Executive of the Year category during the 2015 Stevie Awards for Women in Business held in New York City in November 2015.

She was recognized for her contributions to the business services sector.

She was also elected in December 2015 as one of the nine new members of the Intelligence and National Security Alliance’s board of advisers.

Bruning previously served as VP and GM of global security group at URS prior to its acquisition by AECOM.

She spent nearly six years at NJVC as chief operating officer and held other leadership roles in her two decades at Computer Sciences Corp.

Executive Mosaic congratulates Jill Bruning and the AECOM team for their selection to receive this award.